Highlights From The United States of Women Summit 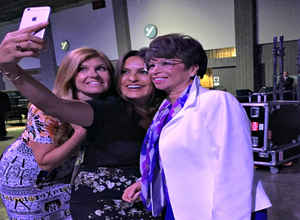 On June 14, over 5,000 women from across the country gathered in Washington D.C. for the inaugural United States of Women Summit.

With the help of a few influencers, change-makers, innovators, and women of power; like Carla Harris, Wall Street banker, author ofÂ Expect to Win,Â and managing director and senior client advisor at Morgan Stanley; Luvvie Ajayi, award-winning writer, digital strategist, and co-founder of the Red Pump Project; Mariska Hargitay, actress, activist and founder of JoyFul Heart; and Shonda Rhimes, the award-winning television producer. The two-day event was more than a summit; it was a movement to celebrate women and promote gender equality around the world.

The summit focused on six topics: economic empowerment, health and wellness, educational opportunity, violence against women, entrepreneurship and innovation, as well as leadership and civic engagement.

Here are a few highlights:

[View the story “Highlights From United States of Women ” on Storify]