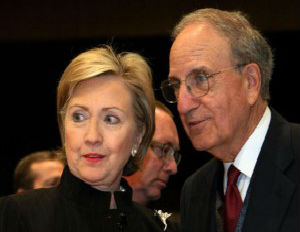 Hillary Clinton began rolling out on Monday one of the biggest-ticket policy proposals of her presidential campaign, a $350 billion plan aimed atÂ reining in the ever-growing cost of college and help millions of borrowersÂ struggling to repay student loans manage their debt.

Drawing on many of the same ideas and advisers on which President Barack Obama built his college affordability agenda, Clinton’s proposals–to be formally unveiled at campaign stops throughout the rest of the week–include federal incentives for states to boost their spending on public higher education, options for students to graduate from state colleges and universities without taking out loans, and pushing for a program to help borrowers refinance existing debt first pitched by Obama.

If Clinton is elected, thisÂ slate of higher education proposalsÂ would be a top priorityÂ in the first year of her administration, said a campaign official who declined to speak on the record before Clinton formally announced her proposals. Most of the programs would require congressional approval, as would the campaign’s preferred way of funding them, by capping the value of itemized tax deductions for the wealthy.

The Democratic front-runner’s pitch will likely satisfy many education advocates on the left, and allow Clinton to offer a detailed plan to the many voters voicing concerns about student debtÂ and college affordability on the campaign trail.Â Nearly seven in 10 of those graduating from college take out student loans and total student debt owed in the United States exceeds $1.3 trillion.

The so-called New College Compact is designed to doÂ the same thing for higher education that the Affordable Care Act did for healthcare, bending the cost curve, and requiring that non-educational costs–expenses like marketing a university or building a new football field–compose a smaller percentage of an institution’s spending.