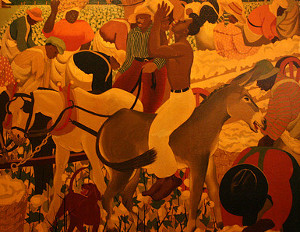 A 73-year-old mural that hangs in the lobby of The Roosevelt Hotel in New Orleans is the basis of a lawsuit filed by an employee on Monday.

Deandra Pittman, a massage therapist at the Roosevelt, says the painting “creates a hostile work environment and subjects her to feeling demeaned and looked down upon.â€ The mural depicts African-Americans picking cotton in a field and includes a shirtless slave drinking alcohol while riding a donkey backwards.

Pittman claims she has “on multiple occasions complained about the mural to management of the Roosevelt New Orleans and management has refused to remove the painting or otherwise take it from view of plaintiff and other African American employees of the hotel.”

“The mural bothers her every time she walks through the lobby,â€ says Al Thompson Jr., the attorney representing Pittman in her suit against the hotel, which is owned by Hilton Worldwide. “The hotel should appreciate the sensitivities of their employees and their guests.â€

A plaque located near the mural reportedly states “like much of art, the subject matter from the social realism movement can be considered out of touch with current mores and standards.”

Hilton Worldwide declined to comment on this story, saying it “does not comment on matters of pending litigation.â€