How To Get Hired With Little Or No Skills 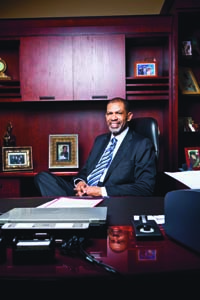 When Michael A. Rashid joined AmeriHealth Mercy Family of Companies as executive vice president and chief operating officer 15 years ago, he grew the organization from a single-product HMO serving 500,000 in two states to a group of companies with four distinct products, including management and administrative services, in 14 states serving more than 7.4 million members.

Today, Rashid is president and CEO of the privately owned company, which had $4 billion in total revenues in 2010 and recently partnered with Independence Blue Cross and Blue Cross Blue Shield of Michigan to expand services for Medicaid beneficiaries. Rashid is implementing an ambitious five-year plan to make the company the market solution for Medicaid, which now serves roughly 60 million Americans–a number that will increase significantly as a result of the Patient Protection and Affordable Care Act signed into law in 2010 by President Obama. Rashid’s ideas for solidifying this market include cutting costs to government expenditures (Medicaid can typically be one-quarter of a given state’s budget expenditures); creating partnerships and programs with state governments, vendors, and business professionals that will improve healthcare services; and helping minorities at all levels take advantage of healthcare opportunities beyond clinical work.

Rashid, who holds a bachelor’s in marketing and an M.B.A. in finance from Harvard, has recently pledged to triple the company’s spend with minority vendors to $30 million over the next three years. These are all strategies that will also increase the company’s bottom line. The growth of the healthcare industry represents huge job and business prospects for African Americans, says Rashid, who leads one of the nation’s largest organization of Medicaid managed care plans. “Healthcare is one of the largest businesses in America. It’s one-sixth of the economy–and this is all pre-healthcare reform.â€

In his first year in his new position, he has already submitted an enthusiastically received plan to save the state of Pennsylvania $1 billion in spending, in part by increasing home- and community-based services and reducing institutional services, and he has passionately championed the Diamonds in the Rough program, which trains and hires people who have basic or few work skills, some of whom have transitioned from welfare rolls and homelessness. The program is managed by Debbie Wright, the director of talent acquisition in the human resources department, and offers job training, financial literacy, and even homebuyer assistance for its 179 full and part-time workers. In four years, the organization has hired and promoted hundreds of employees–some of whom now have bachelor’s degrees. Their ability to change behavior, Rashid says, has created more productive workers and citizens at a time when such people have been written off in the job market. Here’s how Rashid plans to accomplish his ambitious agenda.