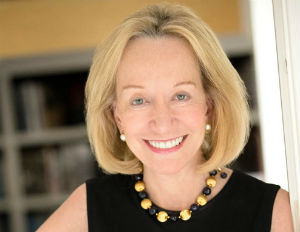 When Doris Kearns Goodwin was six years old living in Long Island during the early 1950s , her father taught her the “mysterious and wonderful artâ€ of keeping score in baseball. He went to work everyday and she recorded for him the history of that day’s Brooklyn Dodgers game. When he came home from work they’d have a nightly two-hour conversation.

Goodwin is a Pulitzer prize winning biographer whose most recent book ‘Team of Rivals’: The Political Genius of Abraham Lincoln was the basis for Steven Spielberg’s Academy-Award winning biopic Lincoln. Goodwin wrote about baseball, the Brooklyn Dodgers and Jackie Robinson in her 1997 memoir Wait Till Next Year.

“When you’re only six years old,â€ GoodwinÂ said. “And your dad comes home every night and spends two hours with you, as you in excruciating detail tell him every play of every inning of the game, you begin to think ‘there is a magic in this history.â€

Jackie Robinson was her favorite baseball player, as she details in her memoir, and it didn’t seem strange to her that her favorite player was black.

“In the beginning I simply saw him as this fabulous player,â€ Goodwin said, “who could get on first base and then distract the pitcher and steal his way to second and get the pitcher so upset he’d somehow get to third and somehow get home. It was only later that I realized the impact he had not only on baseball but on the world, that I realized he became a civil rights hero as well as a baseball player.â€

In those days baseball with its slow-pace allowed plenty of time for conversations with loved ones. According to Goodwin, “No other sportÂ had captured the hearts and the imaginations of the American people. You could walk down any block and you could hear what was going on from inning to inning because every radio would be turned on to baseball. You could argue on your street corners or in local bars about who was the better centerfielder among – Mickey Mantle or Duke Snyder – et cetera, et cetera. It was a part of the fabric of your life. And so when Jackie Robinson broke through, it wasn’t just breaking through in one of any number of sports. It was “the” national sport. I mean, we lived it. I went to bed dreaming about the Dodgers.â€

This resurgence of home and family after the war had launched baseball as the national pastime and everyone was a fan of one team or another. So when Jackie Robinson integrated the sport, according to Goodwin, blacks and whites “had to look at themselves differently, had to look at their relationships differently, and Robinson carried these hopes like a bridge up to Martin Luther King and Rosa Parks.â€

Goodwin said, Major League Baseball executive Branch Rickey knew that Jackie Robinson was “the” person who could carry the burden of being the first person, to open the doors to other blacks. “You just hope that blacks today understand the shoulders on which they stand,â€ Goodwin said.

Goodwin finally got to get Robinson’s autograph when she was about 12 years old.

“I’d try year after year but his line was always so long. And in those days we girls had those silly autograph books with sentimental sayings from girlfriends and I thought if I put him in the middle of the book it would be like he was an intimate friend, and he looked down and saw all the messages from my friends, he actually read them and he said : “Well I see I’m in good company,â€ And he wrote: Keep your smile a long, long while. Jackie Robinsonâ€

Source for quotes and information was PBS