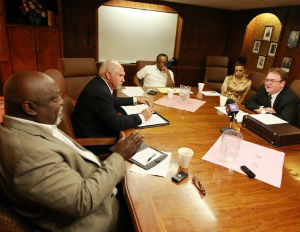 This past Saturday, leaders of the branches of the KKK and NAACP met in Casper, Wyoming to discuss recent violence to black men there, according to NewsOne.

The leader of the NAACP of Wyoming, Jimmy Simmons, reached out to the leader of the United Klans of America John Abaar. The meeting which was originally scheduled in June had delays while rules were established between the two parties. A primary one being the that they meet with security.

The meeting discussed the KKK’s increase in new members since President Obama’s election and the desire for secession from the United States.