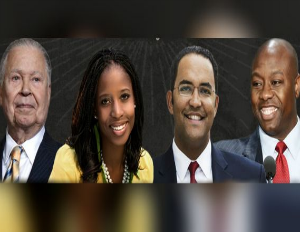 On Feb 11, the Republican National Committee (RNC) hosted their 3rd Annual Black Republican Trailblazer Awards luncheon in Washington, D.C. At the iconic Howard Theatre, the late Sen. Edward Brooke III was honored, as he was the first African American popularly elected to the U.S. Senate since Reconstruction. Awards were also presented and given to history makers in the making, including Sen. Tim Scott, U.S. Rep. Mia Love, and U.S. Rep.Will Hurd.

The sold-out event showcased the latest milestones in black history, and brought together leading legislators from across the nation. During an interview before the event, Republican National Committee Chairman Reince Priebus said, “I think it’s the right thing to do for our party … fighting for every vote in America is the right thing to do in our party. I want to see us increase the numbers of Republican votes in the black community so that increase actually has a clear impact on the outcome of the election.” Throughout the country, Black History Month celebrations continue.