Judge Holly Thomas Has Been Confirmed To The Ninth Circuit 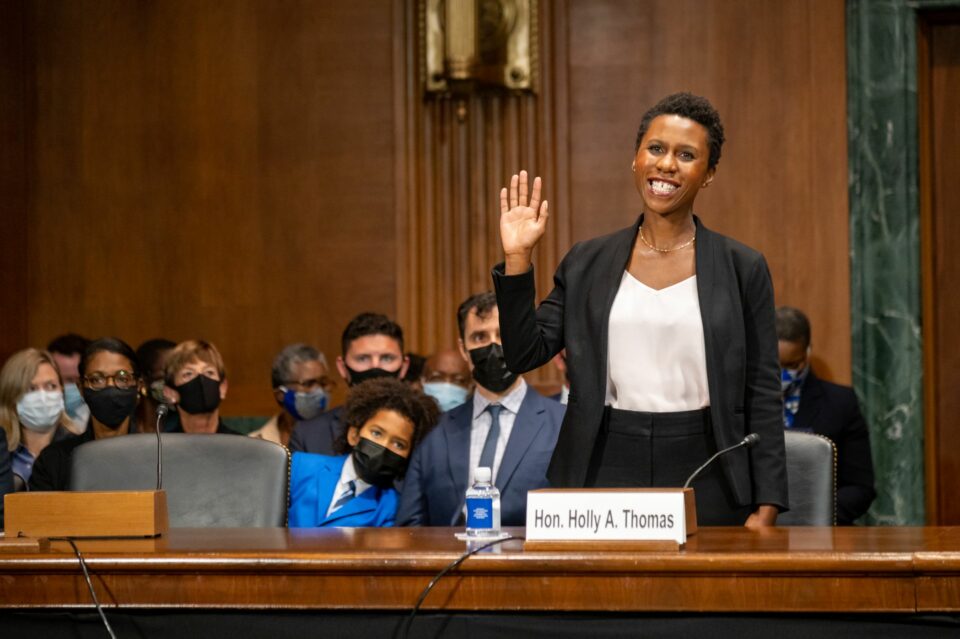 Los Angeles Superior Court Judge Holly Thomas became the fourth Biden nominee to be confirmed to the U.S. Court of Appeals for the Ninth Circuit Thursday.

Bloomberg Law reported Thomas was confirmed by the Senate in a 48-40 vote, making her the second Black woman to ever sit on the San Francisco-based Ninth Circuit Court of Appeals. Judge Johnnie Rawlinson, who former President Bill Clinton appointed in 2000, was the first.

All 40 votes against Thomas came from Republicans, while another 10 GOP members abstained, as did Tim Scott (R-S.C.) and Kyrsten Sinema (D-AZ).

Judge Thomas’ career on the bench can be described in the words of late Rep. John Lewis as a person that gets into “good, necessary trouble.”

Thomas overcame a party-line committee deadlock on her nomination that took a second floor vote to move her forward.

Much of the drama surrounding her nomination was due to an amicus brief Thomas filed in federal court challenging a 2016 North Carolina state law banning transgender and non-binary people from using the bathroom aligned with their gender identity. During her confirmation hearings last year, Thomas was questioned by Republicans repeatedly concerning the brief.

Courthouse News reported Thomas also drew criticism from Republicans due to her history as a civil rights attorney and her previous work with the NAACP Legal Defense and Educational Fund. The two positions are likely among the reasons she was nominated. The judge also previously served as the deputy director of executive programs at the California Department of Fair Employment and Housing.

“To put it simply, our justice system would look very different if it were full of judges like Holly Thomas. Judge Thomas has spent her entire career advocating for the law to protect those who need its protection the most,” Alliance for Justice President Rakim H.D. Brooks said in a statement. “She was a preeminent civil rights lawyer, and she will serve admirably on the Ninth Circuit Court of Appeals. AFJ could not be happier — and it brings me special joy that Judge Thomas will succeed one of the true giants of the federal judiciary, William Fletcher. This is a big step toward creating a justice system that sees and respects all of us.”

The Stanford and Harvard graduate joins Lucy Koh, Jennifer Sung, and Gabriel Sanchez as judges confirmed to the Ninth Circuit under President Biden.