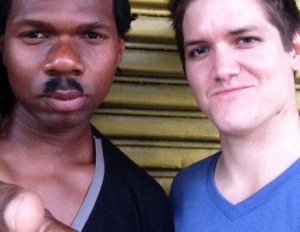 Homeless New Yorker Leo Grand and programmer Patrick McConlogue teamed up to create a ride-sharing app that was quickly profitable.

A recent social experiment by a programmer and a homeless man has yielded unexpected results.

According to Business Insider, New York-based Leo Grand is homeless, yet has a successful app in Apple’s App Store thanks to Patrick McConlogue, a 23-year-old programmer.

McConlogue walked past Grand on his way to work every day until he got the idea to help Grand get back on his feet through programming.

He bought Grand a Chromebook, some Javascript books, and helped him learn to code by teaching him for an hour each day.

In December 2013, they released “Trees For Cars,” a ride-sharing app that helped people save money (as well as the environment) by sharing rides based on their location.

So far, Grand’s app has brought in about $10,000, but Grand hasn’t touched it. Why Because he doesn’t want a bank account, according to McConlogue.

In order to receive payments from the App Store, Grand needs a bank account. McConlogue used his, and promised him the money. “We set it up in my name because I have a bank account. The deal was, at the end of the day all the money was Leo’s. Not mine,” McConlogue tells Business Insider.

They’ve agreed that, if Grand doesn’t get the cash in a year, it’ll be donated to his homeless shelter of choice.

Grand is still working on programming, and is receiving even more help. Mobile software education school TurnToTech gave him a scholarship to attend classes for free.

Helen Little: ‘Radio is More Like An Evolution of a Medium’

FacebookTwitterYoutube
← Keep Track of Product Recalls ← Helen Little: ‘Radio is More Like An Evolution of a Medium’
×
'