Honoring Giftedness in the Black Community 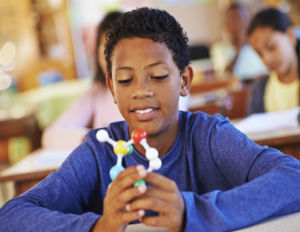 The only son of the first African American bridge contractor in the state of Indiana, Jenkins completed an A.B. degree at Indiana Normal School. At Indiana, he came to the attention of Paul Witty, who studied psychology and later took a position at Northwestern University in Chicago. Witty would become a leader in the nation’s first organization devoted to the support and advocacy of gifted children, the American Association for Gifted Children. His career and Jenkins’s would soon intertwine.

Jenkins attended Northwestern as a graduate student, finding a university climate that nurtured his scholarship and provided support for his ideas and research. In the early 1930’s, Northwestern was growing quickly and becoming an eminent research university. Founded by Methodist ministers and endowed by private donors, the schoolÂ opened its doors early on to students of different races and religions. Here, Jenkins would study withÂ Witty.

As a graduate student, Jenkins committed himself to the task of providing valid evidence that African AmericanÂ children could indeed take traditional intelligence tests and score in the upper limits. While working against the tide of scholarly and political viewpoints to the contrary, Jenkins published 10 scholarly works devoted to the topic of high intelligence or giftedness in Negro children. He most notably published a work, co-authored with Witty, on the case study of “B,â€ a 9-year-old (and 4 months) girl from Chicago, who had a Stanford-Binet IQ score of 200.

This case and others earned Jenkins a place in history as the first African American scholar to study exceptional intelligence in black students, publishing some of the first papers in the field and creating the groundwork for its scholarship and practice today.

The Jenkins Scholars Award recognizes and honors black students in grades 6—12 who exemplify the type of student that Jenkins sought out during his work in the early 20th century. This year, new scholars are being sought from across the nation.The 3rd Annual Jenkins Scholar Project celebration will be held at the 63rd Annual National Association for Gifted Children Convention in Orlando, Florida.

All supporters of gifted students are encouraged to share this information and donate to support the awards for selected Jenkins Scholars. Your support will help the NAGC extend the important work and legacy of Dr. Jenkins; it will also help to encourage equitable access to gifted and advanced learning programs nationwide.

This post was written by Joy Lawson Davis, Ph.D., and was originally publishedÂ on the website of the National Association for Gifted Children. It is edited and postedÂ here with permission.