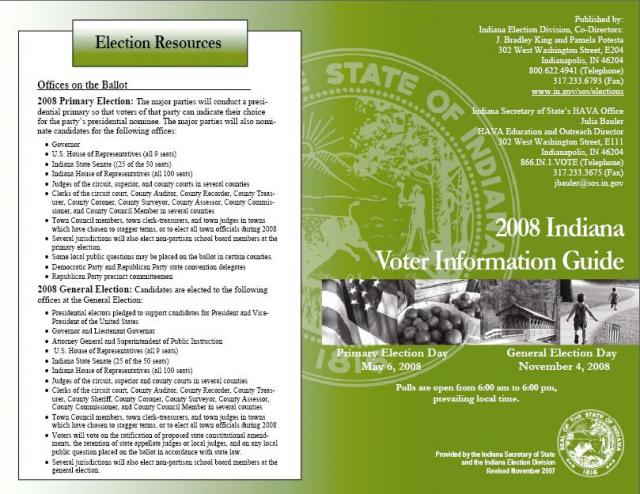 In pre-election polling in Indiana, Obama, 47, was running neck-and-neck with Republican Sen. John McCain, 72, of Arizona. But in the governor’s race, the popular Daniels outspent his Democratic opponent by more than 3-to-1 and was leading in local polls by at least 14 points. One poll said Daniels was leading by more than 30 points.

At his polling place near the Governor’s Mansion in Indianapolis, Daniels said ticket-splitting showed good “independent judgmentâ€ on the part of voters.

Two weeks ago, Thompson shared the stage with Obama during a campaign rally in Indianapolis and he urged voters to support the Democrat.

The reasons for split-ticket voting varied from voter to voter.

“What sticks out in my mind is . . . [Obama’s promise] to give scholarship credits to students who perform community service. It encourages not only higher education but also community service,â€ said Alley, who was voting in his first presidential election.

But he also voted for Daniels for governor.

“I really haven’t heard much from the other candidate [Thompson],â€ he said before he joked, “And my mom works for Mitch Daniels and I didn’t want her to lose her job.â€

Daniels “has done a good job for the state. I don’t have any real problems with him,â€ said Democrat Nicole Fields of Indianapolis, who voted for both Obama and Daniels.

Not every voter was willing to split their ticket. Helen Coleman, 89, of Indianapolis, said she has voted in every presidential election for six decades. She voted straight Democratic on Tuesday.
“I haven’t missed any election and I can’t understand why anyone would,â€ she said.

The polls closed at 6 p.m. local time and election officials said anyone in line at six would be allowed to vote.

That was welcome news in two precincts in Carmel, a suburb just north of Indianapolis.

The heavier than normal turnout meant some voters waited up to five hours to cast their ballots. By late afternoon, Hamilton County election officials had more voting machines and paper ballots at the polling site and the wait was estimated to be only about an hour by the time the polls closed.