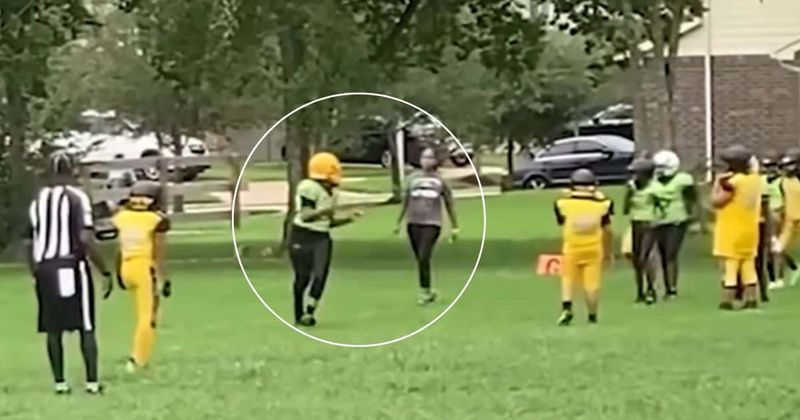 A Texas woman is under fire after she chased down a 12-year-old boy who had just tackled her son during a Pee Wee football game in Houston.

The incident that was caught on video.

The ordeal landed the irate mom in hot water. She and her whole family have been banned from attending any other games for threatening the football player.

It was the season-opening game for the Southside Ravens who faced the North West Gorillas. Ivan Flanagan, was reportedly the boy being chased. His mother, Emilla Rucker, spoke out about the shocking turn of events.

“This is ridiculous. How can you get that angry at a kids game?” Rucker said of the woman who chased her son.

“Your son plays football, they tackle each other, that’s just the name of the game. How can you get that upset to chase him and not only chase him but curse at him while you’re chasing him.”

The boy, with good sportsman-like conduct, even extended his hand to help pick up his opponent after the play.

“Yeah, I picked him up and everything,” said Flanagan. “He was actually trying to shake my hand after the play until his mom I guess started chasing after me.”

A report filed by the Youth Football and Cheerleading league called the woman a “substantial threat to the environment” and stated that she was in violation of multiple codes of conduct.

Not only is she banned from attending future football games, but she has to pay a $200 fine. The North West Gorillas will also pay a $500 fee for not controlling the sideline.

The football player and his mother have been removed from the team, according to a Facebook post by the North West Gorillas.

“First and foremost we would like to apologize to the parents of the young man that was unnecessarily chased across the field by a parent that was a part of our organization. In no way shape or form is that okay nor is it tolerated. We have since removed both parent and children from NWG as we don’t stand with putting nobody’s child in harms [sic] way.”

“Although we can not control anyone else’s actions/emotions we want to take accountability for our behavior as an whole, what part it played and how it was displayed at yesterday’s event. Despite the behavior that was displayed by the opponent team, there was no reason that it escalated to that degree or manner.”

The Houston Police Department said it is looking into the incident.