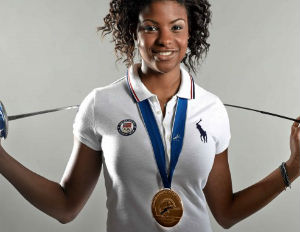 Nzingha Prescod, a 2012 bronze medal Olympian, understands that she’s one of the few African Americans represented in the sport of fencing, but she doesn’t let this deter her. In fact, it fuels her desire to break barriers and pass the torch to other young aspiring fencers.

“Knowing I am part of a collective that is underserved and frequently lacking equal and fair opportunities to make it in this world, is definitely my motivation,â€ said Prescod.

“I think I’ve realized over time that I wasn’t born into the same privilege that the majority of the people I compete with did. Honestly, it makes me angry. But I think that struggle is what is unique from my competitors and gives me my drive. I want my story to be an inspiration to all the young kids that look like me to be the best. I also want them to know that there are other options than football and basketball, and I want to make those options more accessible.â€

[Related: Who Knew? A Look at 5 Black Competitive Fencers]

Born and raised in Brooklyn, NY, Prescod’s mom wanted the family to experience every opportunity that she wasn’t able to access while growing up in St. Vincent.

“She knew growing up in the hood could be a huge potential threat to our trajectories. When she heard about the Peter Westbrook Foundation and of all the Olympians they were producing, she knew that was the perfect outlet for us. That’s how I started fencing. Fencing immersed me in this realm of ambition and high-achievement.”

BlackEnterprise.com caught up with the young trailblazer to learn more about her journey.

BlackEnterprise.com: Did you instantly love fencing or did you gradually become more attracted to the sport?

Prescod: I was 9 years old when I started with my sister and best friend. I didn’t love the sport at first because learning the basics of anything is never really fun. When we finally started bouting, I lost to both my sister and best friend and I hated it. I really started loving it when I started to win bouts. And I remember it was because I felt so satisfied and empowered that I had become better at something that I was struggling with. And I still get that feeling.

What are the top three skills needed to be successful in the sport?

What’s the biggest challenge you’ve ever faced? How did you overcome it?

I think the biggest challenge I face, even bigger than a hip surgery last year, is dealing with confidence and self-doubt; on the fencing strip, but also in the class and everyday life. Initially, I overcame it in fencing by being better prepared than other people my age so that it wasn’t an issue. But when I started competing at higher levels, it became a problem. I work with a sports therapist to gain techniques for battling fear and doubts; like positive self- affirmations, and I have to work on those not only in competition but also in practice and life so it’s second-nature. So I make an effort to do things that I’m scared of and step out of my comfort zone.

What are your long-term goals?

Next year I want Â [to win a] Â medal at the Olympics. That’s my ultimate goal for the fencing chapter of my life. Professionally, I want to combine the two things I’m passionate about; sports and [addressing] social inequalities. I think it’s unfortunate that I am one of few from my Brooklyn neighborhood to be this successful at something. More than anything, I want all the doors that fencing has opened up for me, to be accessible to every person. Next year I want to go to graduate school to study social policy and, hopefully, evidence [of] how sports and activities like fencing can have a significant impact on young kids that are underserved.

How do you think the sport of fencing will prepare you for a future career in social policy?

Fencing has taught me discipline, more than anything. You can only win if you’re disciplined and self-controlled with your game. You can also only manage school and fencing full-time if you are disciplined. My coach and PWF teammates have taught me how to work hard and what it takes to be the best. Fencing is essentially problem-identification and problem-solving. So I think fencing has been a huge character-builder for me, and I think all these skills are transferable to my future career in social policy.

At a young age you’ve successfully carved your own path to success. What is one piece of career advice you can offer to the younger generation?

Find something you love and put the hours in. I think focusing on the process, rather than the result, is key in succeeding at anything. I think the most successful people don’t allow excuses to get in their way and are willing to do things they hate for their vision.

Nzingha Prescod is scheduled for the following fencing tournaments: