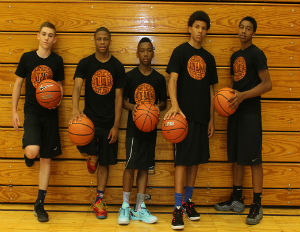 During All-Star Weekend, Nickelodeon Sports held a special screening for Little Ballers, a documentary profiling four kids chasing their hoop dreams through the Amateur Athletic Union (AAU) Basketball League. On the Orange Carpet, BE SportsBiz Content Producer Sakina Spruell Cole caught up with the Director and Producer Crystal McCrary about the process of getting the deal done with Nickelodeon Sports. Hear how NBA ballerÂ Amar’e Stoudemire, music entertainerÂ Lupe Fiasco and Black Enterprise’s CEO Earl “Butch” Graves were an asset.

But first, we caught Benjamin Flores, Jr., a.k.a. Louie of the Nickelodeon live-action series The Haunted Hathaways. He gave BE SportsBiz a brief interview about his career. See why he wouldn’t tell us how much money a child-star makes though.

[Related: How To Land A Baller]

Catch Little Ballers, the journey of four eleven year-olds as they prepare to achieve the dream of being NBA ballers on Wednesday, February 25 at 9 p.m. on Nicktoons.

Be sure to watch the video below.

Leadership at Work: 3 Ways to Sharpen Your Communication Skills