How to Break into Startups the Non-Traditional Way 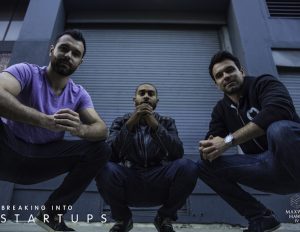 RubÃ©n Harris has a trait that every founder should possess: tenacity. Even with his non-traditional startup path, there is no wonder that his podcast, Breaking Into Startups, sits in the top ranks of the technology category on the iTunes podcast list.

This past week was the launch of the new platform and already people are boasting about how refreshing it is to hear a fresh and relevant perspective. At their launch party held at Thoughtworks Inc., in San Francisco, Harris sat with his co-founders, Timur and Artur Meyster, and spoke about creating an inclusive startup community where everyone gets to shine. “When you look at tech media, every list looks the same. We want employers to understand that great minds don’t think alike and those who travel the road less traveled bring a different perspective than people on the traditional path.â€

His aimÂ is to highlight people that have figured out a way to break into tech from non-traditional backgrounds that don’t just include race or ethnicity, but single parents, veterans, immigrants, people that never graduated from high school or college, career switchers, and even the formerly incarcerated. “I want people to be inspired by others that haveÂ similar non-traditional backgrounds and on the flipside, I want our featured guests to embrace their unique stories. A lot of times, people are ashamed of their backgrounds. I want them to embrace it.â€

They will be releasing two to three podcasts a week and have already recorded over 30 stories, the first starting with, Bay Area native, Albrey Brown the founder and CEO of, Telegraph Track, a coding program for underrepresented minorities, empowering them to have successful careers as engineers.Â

Brown’s dream was to play basketball, but he was very lackadaisical as a student. His mom was diagnosed with cancer in his sophomore year, so after graduation, he took a couple of years off to regroup and never went back. Although his background is very non-traditional, he’s not a white male who holds a Computer Science degree from Stanford, his drive and persistence got him where he is today.Â

Harris’s goal is to build a viable pipeline for people with non-traditional backgrounds that focuses on providing high-level adviceÂ and embracing partners that care deeply about diversifying tech. “We have our own voices and we’re sharing these stories. Our job is to continue to give people a distribution channel to do it.”