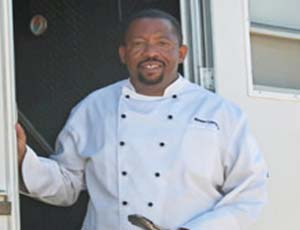 Chef Darryl King started Riteway Catering in Phoenix more than 10 years ago, but it’s only in the last year that he’s run the Taste-Rite food truck, using a trailer he originally built for participating in barbecue contests. Here he gives BlackEnterprise.com an inside look at this hot trend in the food business, why it was a good business move for his brand.

BlackEnterprise.com: What made you pick a food truck vs. a restaurant?

King: It’s a little bit cheaper to do that than to sign a lease and rent a piece of real estate. And [with a restaurant] you’ve got to have employees. I still have a couple of guys that work for me, but when you’ve got a restaurant, you’re almost making a decision that you’re living in that. It’s not easy in a food truck, either, but to have the freedom to be able to move around [to meet] demand–that’s the option you have with a food truck and street food.

With the truck, what would you say were your startup costs?

Well, I built my trailer. But I would say for a person to start up a food truck you’ve got to have at least $25,000 if you just go out and get one of the standard, already-built trucks with all the equipment in it. That’s for a used truck that’s in decent shape. But if you want something that’s brand new, you’re looking at $80,000.

What were some of the challenges were when you were starting?

I think the biggest challenge for anybody with a food truck is getting used to all the ordinances you have with the cities. They tell you what you can do and can’t do.

And what lessons have you learned?

You definitely have to be professional with your customers. You have to give people a fair amount of food for their money. And you’ve got to be really consistent. I’ve learned you must keep your food as fresh as possible, give your customers what you say you’re going to give them, and follow the rules.

What do you predict your revenues will be this year?

That’s hard to say because this will be the first full year for me doing food truck stuff. Being that it’s so seasonal and it was still a bad economy, I really couldn’t say what the gross revenue would be yet. I would hope that it would be in the $65,000 to $85,000 range, but who knows? I’m still trying to do a lot of festivals. [Having the truck] gives you some visibility to those who didn’t know you were out there doing catering before you were doing food trucks. I would say a good 15% to 20% [of my revenue] is based around the visibility of the food truck.

Why do you think food trucks are so popular now?

I think in our society, everyone wants everything right now, they don’t want to wait. I mean people don’t even e-mail anymore, they text, right away–they want that instantaneous response and I think it’s the same way with the food business. People want good, creative food that they don’t have to pay a lot of money for it. It has its advantages and its disadvantages, too, but it definitely has a lot more upswing than downswing.

King, along with other food industry professionals, will be profiled on BlackEnterprise.com throughout this month, in conjunction with Black Enterprise magazine’s November 2011 “A Passion for Foodâ€ issue.