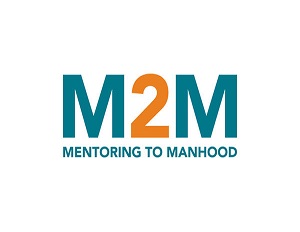 With a mission to instill strong character, leadership skills and academic excellence in young men of color, Mentoring to Manhood (M2M) was created in April 2005 to respond to the needs of young black men in Prince George’s County, Maryland.

“We started with high school and migrated back to middle school,” says M2M co-founder Rob Malone. “When we started there was not a lot of rigor in picking where we started, we just knew we saw stories about kids, mostly teenagers and high schoolers, being shot, killed, or engaged in juvenile misconduct, and we wanted to address that. I happen to believe that in some small way we’ve been a part of the solution for this county in driving a more than 30-40 percent decrease in crime.”

With a team of mentors from various career fields including educators, attorneys, engineers and bankers, M2M is committed to helping young men, ages 12-18, not only become better individuals academically, but also within their community. In addition to weekly tutoring sessions, M2M participants go on leadership retreats, sit in on career-building workshops and take in leadership and character building advice from numerous speakers who come speak with the young men.

“All of that is geared towards building relationships,” says Malone. “Kids need to know that we are connecting to them. That we are spending time with them where they can relax, interact and get to know us and we get to know them.”

With many of the young men coming to M2M in need of an outlet to discuss the issues taking place in their home, the organization holds anger management workshops at least once a year where parents and students come together to work through their unresolved family issues.

Recognizing the need to fill the void of a consistent relationship with a strong male figure, Malone says the goal of M2M is to provide the young men with stability so that they can become effective leaders in their home and community. Having impacted more than 600 young men within the Prince George’s County area since its inception, Malone and M2M’s chairman Therman Evans, Jr. say it’s extremely rewarding to see young men who’ve gone through the program become college graduates and leading men of character.

With statistics showing that just 55 percent of African American boys graduate high school in Prince George’s County, M2M is proud of its work in getting all of its young men to finish high school. Last year, the program saw its largest increase academically, with the average GPA of its students increasing from a 1.9 GPA to a 2.5 GPA.

In addition to mentoring and tutoring, M2M prides itself on spotlighting individuals within the community whose presence has served as a positive role model for young black men. Each year, Mentoring to Manhood holds its “Men Who Make a Difference” event that honors the achievements and influence of local men in the Washington, DC area.

Celebrating 10 years of positive change within the Maryland community, M2M is raising funds to provide more academic and mentorship resources for its young men. Click here to learn how you can donate to the program and visit mentoring2manhood.org to see how you can make a difference in a young man’s life today.