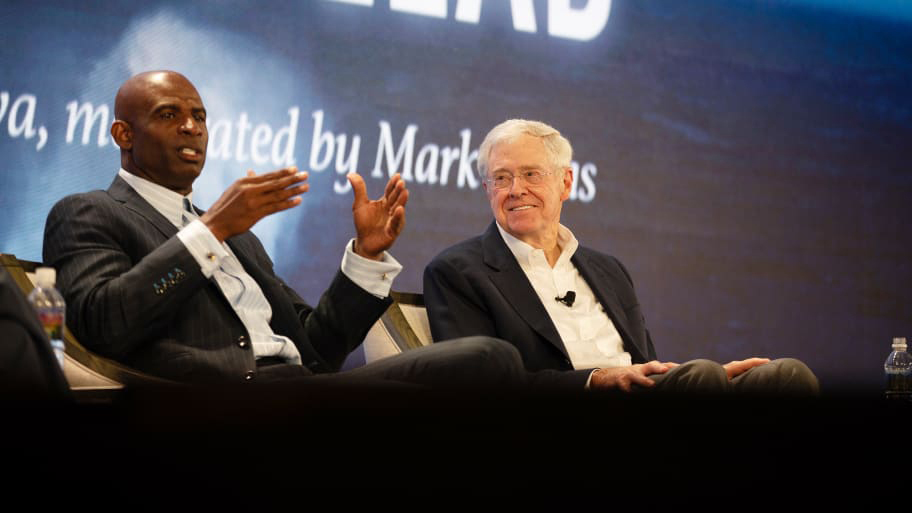 Sanders and Charles Koch speaking at the Stand Together event.

In the spacious ballroom at the scenic Renaissance Indian Wells Resort & Spa, roughly 20 miles outside of Palm Springs, California, retired NFL football superstar Deion Sanders puts forth his charge to the teeming audience. “Get in the game and provoke change,” he shouts. “Don’t take time for granted. The reason I liked sports because we have a clock to know how much time we have…”

Like a coach motivating players, he continued with his appeal: “When are we going to do it instead of just talking about it?… We can make a change…if we stand together.” As he closes, the room explodes with cheers.

Sanders was one of a phalanx of speakers who participated at the beginning of the year in the four-day retreat for social entrepreneurs and philanthropists which was once called the Seminar Network—rechristened in May as Stand Together—that’s organized in conjunction with The Charles Koch Foundation and The Charles Koch Institute. The objective of the semi-annual conference is to instruct nonprofit leaders on how to “grow, scale, and make a greater impact” as they meet their mission.

In fact, the former gridiron star who kicked off the meeting with Charles Koch–who runs the second largest private company in the nation–attended the event not only to deliver a pep speech but also to move forward the agenda of Dallas-based Urban Specialists, an organization that leverages the experience and credibility of ex-gang members, former offenders, and professionals to reduce gang violence and increase community opportunities through such measures as entrepreneurship. Sanders helps develop initiatives and lends his celebrity to provide exposure for the program, working closely with Founder and CEO Pastor Omar Jahwar, who joked during his fireside chat with U.S. Sen. Mike Lee (R-Utah) and diversity specialist and comedian Karith Foster that when he was praying to gain significant support for his initiative, “I didn’t think it would be Charles Koch but here were are.” Urban Specialists is part of the Stand Together Catalyst Network, which currently has provided grants for more than 140 “high-impact” nonprofits across the country.

Officials say the organizations linked to Stand Together’s Catalyst Network have tackled some of the nation’s most pressing and relevant issues in six areas: addiction and mental health; financial empowerment and entrepreneurship; housing and homelessness; in-prison, re-entry and second chances; workforce development; and youth and education. Although all of the collaborations have not been with African American organizations, most deal with the challenges that continue to disproportionately affect multitudes of African Americans. Koch officials have been increasingly stressing partnership as a means to address these ills. Stand Together Chairman Brian Hooks told the audience: “When we unite people to solve problems, we’re able to accomplish things that were otherwise thought of as impossible. “

In fact, the Koch Foundation has developed the Courageous Collaborations Initiative, which “supports interdisciplinary research to overcome intolerance and discover new tools to empower individuals to engage across divides.” In short, not letting political and racial polarization, among other barriers, keep organizations and people from coming together to solve the nation’s most complex and urgent problems.

The greatest evidence that parties can cross the aisle to find solutions has been criminal justice reform. Over the past few years, liberal CNN political commentator and activist Van Jones has worked closely with Koch Senior Vice President and General Counsel Mark Holden on such issues as “Ban The Box,” the campaign to remove the question on job applications that asks if applicants have a criminal record. The two also worked with congressional Democrats and Republicans as well as the Trump administration on passage of the “FIRST STEP Act.” The legislation seeks to diminish mass incarceration through the potential reversal of seemingly pernicious, outdated mandatory minimum sentencing related to drug charges and create new avenues to promote rehabilitation and reduce recidivism.

New alliances have been formed around the legislation in recent months. For example, Johnny C. Taylor Jr., CEO of the Society for Human Resource Management, which represents employers of more than 60% of the U.S. workforce, announced a commitment to adjust recruiting practices to include those with criminal backgrounds. In a national initiative called “Getting Talent Back to Work,” Taylor shared at the conference details of a national pledge to give opportunities to qualified people with a criminal background and deserving of a second chance.

In addition to SHRM and Koch Industries, organizations that signed the pledge included the U.S. Chamber of Commerce, National Restaurant Association, National Retail Federation, American Staffing Association, and more. “As a country, we are making improvements to the justice system,” Taylor asserts. “It’s our time as business leaders to reframe the conversation around nontraditional talent pools and embrace those with criminal backgrounds as job candidates.”