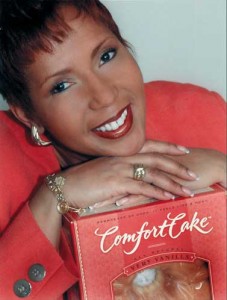 During her years with these firms Hilliard helped pioneer strategic niche marketing targeting diverse consumers. Indeed, she was a key figure in putting supplier diversity on the corporate agenda and, in turn, created the kind of environment where she would find opportunity as CEO of her own venture. Today Comfort Cake products are distributed nationally to major retailers, including Walmart, and through its website, www.comfortcake.com.

Landing her first contract with Walmart was a grand-slam homerun but she soon found it necessary to adapt in order to keep the partnership alive. “Not long after we started, trans fat free requirements began spreading across the country and Comfort Cake had to take a step back and work that out if we were going to able to continue as a Walmart supplier,â€ says Hilliard. After some time off the shelf to regroup, newly formulated Comfort Cake products have come back strong, with distribution expanding from 42 stores to 500 by February 2013.

“I was very gratified with how they were willing to work with us to find that sweet spot. Walmart thinks long term,â€ she says, also crediting Walmart’s willingness to partner with her on product development (coming soon, the new Sweet Benefits line of sugarless cakes) and going the extra mile to invest in her potential to reach the next level as an entrepreneur.

“Walmart sponsored me to attend classes at the Tuck School of Business at Dartmouth College, even though I already have a Harvard MBA. They use a great deal of foresight to understand their suppliers’ capabilities as markets change and shift and identify where there may be a need to evolve. It was a phenomenal experience and I was extremely grateful.â€

Given her experiences as an entrepreneur and corporate executive, Hilliard finds it easy to identify with Walmart’s focus on the legacy of Jackie Robinson, whose work ethic and sense of grace when confronting adversity she believes set a gold standard for African Americans in business–and in all fields–to emulate.

“He was an amazing icon who showed that diversity is good business and that breaking barriers is about performing at the top of your game, developing relationships, and making the way for others to follow and do better.â€

What made Robinson so heroic is that he achieved great strides as a ballplayer when he broke the color line in the majors some 65 years ago. He made a commitment to demonstrate professional excellence, maintain his dignity despite racist attitudes inside and outside the ballpark and fight for equality. He continued that tradition after baseball, helping to create employment and entrepreneurial opportunities for blacks as one of the first black vice presidents of a major American corporation and co-founder of Freedom National Bank, an African American-owned financial institution based in Harlem.

Says Hilliard: “If you don’t see it, you won’t believe it. The best thing we can hope for when we succeed is that we help the next generation believe in their dreams.â€
Hilliard, like other such entrepreneurs, is clearly conducting business in the tradition of 42.