How To Create Balance In Your Life 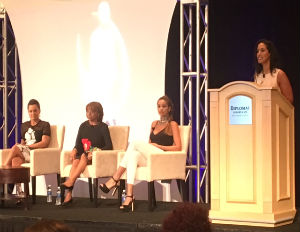 Putting the exclamation point on the 2016 Women of Power Summit’s theme of knowing your worth, owning your truth, and embracing your power, the summit sought to continue to delve into the core and authenticity with the AARP sponsored “Real Talk” executive leadership session featuring actress, singer, and author Vanessa L. Williams; her mother, retired music teacher and author, Helen Williams; and her daughter Jillian Hervey, singer with neo-soul group, Lion Babe.

Moderated by the Editorial Director of the Black Enterprise Women of Power Summit and host of Women of Power TV, Caroline Clarke, with remarks by the CEO of AARP, Jo Ann Jenkins, this session offered an intergenerational conversation about the costs and rewards of taking the road less traveled. The trio shared the key to attaining success and leaving a legacy while exploring approaches to dilemmas over a dynamic exchange.

Exhibiting the importance of her bond with her family, Vanessa Williams shared her path to and through the Miss America pageant detailing her trials, tribulations, and battles with racial discrimination as she maneuvered the pageant circuit. Following the photo scandal that left Williams stripped of her crown, Williams relied on the support of her parents who loved and uplifted her through it all. “I’m secure with who I am and how Vanessa was raised,â€ says mother, Helen. “It wasn’t before long that I set out to prove to the Miss America pageant that despite their mistreatment, after 30 years leading up to their public apology, my dreams still did come true,â€ continued Vanessa, detailing her triumph following the tragedy.

When asked how she continues to bond with her children and grandchildren, given the vast differences in eras and lifestyles, grandmother/mother Helen stated “things change, times change, and if you’re going to live in the world with these people you have to get to know them. You have to understand that they have different lifestyles, different expectations, and you have to get with it.”

Helen, Vanessa, and Jillian concluded the session sharing the lessons they’ve learned from each other throughout the years:

Jillian’s lesson from Grandmother “Gaga” Helen: The amount of strength that Gaga oozes is the thing that I carry with myself.

Vanessa’s lesson from Helen: You don’t have to be the best in the room just do your best. Do the best you can and just be prepared.

Helen’s lesson from daughter, Vanessa: From my daughter, I’ve learned that she’s a survivor and I’m accepting the fact that she will always be a romantic, and I am not.

Vanessa’s lesson from daughter Jillian: I’ve learned to appreciate the moments she’s created and relic in it.

Vanessa’s additional lesson from mother, Helen: I’ve learned my strength. She created me and I have half of her DNA, which is tough, ambitious, and relentless.