How to Deal with a Boss Who's Younger Than You 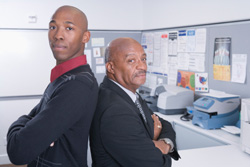 Sixty-nine percent of workers ages 55 and up report their bosses are younger than them, according to a Careerbuilder.com survey (Image: Thinkstock)

Let’s face it: It’s not easy for your ego to accept taking orders from a superior, let alone a person who is 10-20 years your junior. “It feels like an out of sequence trajectory,” says Deborah L. Plummer, PhD, a nationally recognized psychologist and diversity expert. Yes, it’s a hard pill to swallow, but it’s becoming the norm for many mature workers in a day and age where technology is king and baby boomers are working beyond the retirement age.

According to a 2007 Bureau of Labor Statistics study, the number of workers over 55 increased 30% between 2000 and 2005, with expectations for continued growth. In 2008, statistics showed workers in the same age range anticipated to leap from 18.1% to 23.9% of the labor force by 2018. What’s consistent throughout both sets of data is the decrease in the labor force under 55 years old. Nevertheless, these 20 or 30-somethings are young bosses who are running the show, from the boardroom to their corner offices.

BlackEnterprise.com spoke with Dr. Plummer and Marsha Haygood, career coach, president and founder of StepWise Associates, to get advice for boomers about bridging the generational gap, determining an effective way of communication and why you should “lay low.”

Learn how to communicate with one another, and don’t hesitate to ask what method your boss prefers. AIM, Google chat or email? That’s one of the first questions you should ask your boss. Technology has allowed for communication to be instant, doing away with in-person meetings and even phone calls as ideal forms of communication in the office. Younger workers opt to use instant messaging as their main source of communication.

Lay-low. This doesn’t mean to be invisible; but rather know your role in the company. A survey by Lee Hecht Harrison Company found that 70% of older employees are dismissive of younger workers’ abilities. “Don’t get caught up in evaluating your boss,” advises Dr. Plummer. Remember: “That’s not your job.”

Accept change. Everyone has a role in a company and your boss got the position for a reason. Whether or not you accept that is irrelevant, however, if it’s going to affect your attitude on-the-job, and more importantly the company’s bottom line, then you need to leave it at the door.

Show what you bring to the table, but also be willing to learn. Don’t expect your age to give you immediate office cred. You have to work for it and your boss will have to do the same. Let your various skills show through your assignments, and if you’re unsure of how to do something that your boss requests (possibly jumping on an impromptu video conference), be willing to ask questions and learn. “Rather than saying we’ve always done it this way, think about the end result,” says Haygood. “Be open to other ways of doing it.”