Google Now Comes to iOS, How to Get the New Service 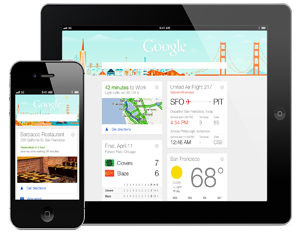 Google’s product empire continues to grow with its latest invention slated to give Siri a run for her money.

The tech giant released its Google Now service for the iPhone and iPad on Monday. Available through Google’s Search app in the Apple App store, the personal assistant service will provide information customized to your life. Similar to the Android version, Google Now for iOS studies your habits and your routines so you don’t have to go digging through calendar appointments or driving directions on your phone.

With Google Now placing a virtual assistant at your fingertips, here’s a quick how-to guide to get the service for iPad and iPhone, as well as several pointers for setting it up:

Get Google Now for iOS
Since Google Now is not its own app, but a feature/service inside an app, you already have to have the Google Search app installed on your iOS device. If you already do, just update it. New users should have their Google account handy because they’ll need it to sign in.

You’ll see a welcome video detailing the basics of Google Now when you launch the app for the first time or after installing the latest update.