Lessons On How To Raise An Entrepreneur 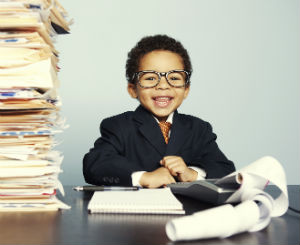 Fostering an entrepreneurial mindset helps children focus on solutions, rather than the problem. Parents (and mentors) should nurture their child’s inner entrepreneur, if they realize their child has great ideas or talents that can generate money. The best place to start is to move the child away from a consumerism mentality and get them to become a producer.

Teaching Young People to be Entrepreneurs

The entrepreneurial mindset is an attitude, along with a set of skills and behaviors, that young people need to succeed academically, personally, and professionally. These include initiative and self-direction, risk-taking, flexibility, adaptability, creativity, innovation, critical thinking, and problem solving, according to the Network for Teaching Entrepreneurship (originally National Foundation for Teaching Entrepreneurship), an international nonprofit organization that provides entrepreneurship training and education programs.

Since 1987, NFTE has worked with more than 700,000 young people from low-income communities in programs across the U.S. and around the world. As of now, NFTE operates our successful curriculum in 23 locations in 10 countries and continues to expand, sharing and spreading the transformative power of entrepreneurship.

Past nominees and winners of Black Enterprise‘s annual Teenpreneur of the Year Award, presented at the Entrepreneurs Summit, have been participants in NFTE’s National Entrepreneurship Challenge or Elevator Pitch Competitions.

In Raising an Entrepreneur: 10 Rules for Nurturing Risk Takers, Problem Solvers, and Change Makers,Â author Margot Machol Bisnow, the mother of two thriving entrepreneurs, identifies the Â “rulesâ€ she followed while parenting her children, to raise creative, confident, resilient, and fearless kids that grow up to lead fulfilled, happy lives and change the world.

Bisnow interviewed 60 entrepreneurs and their mothers, including the founders of TOMS Shoes, Under Armour, Geek Squad, Method products, WordPress, 23andMe, Kiva, charity: water, and Pencils of Promise. She also spoke with young stars in nonprofits and the arts–actors, songwriters, and activists. The group diverse interviewed cut across gender, racial, religious, and socio-economic backgrounds, as well as every type of family from across the country. However, there were common patterns, especially among parents who believed in their kids and let them follow their passions.

From her extensive interviews, Bisnow argues that, “Parents’ well-intentioned efforts to help their kids prepare for organized careers often boomerang, because when parents ignore their children’s skills and true passions, they limit their kids’ options and create a dangerous environment of pressure and anxiety, where their kids are less likely to succeed.â€ Instead she advocates for “watching your children’s interests, and encouraging them to build a career around what they want to do, rather than what you may want them to do.â€

4 Tips To Teach Your Kids Entrepreneurship