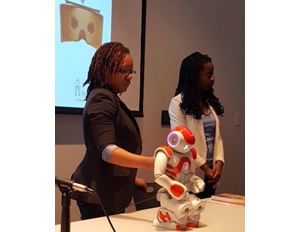 Eighty-two young people of color from Washington D.C.-area schools were at the event to take part in hands-on demonstrations of robotics and drone technology.

Also, at the event was Dr. Ashitey Trebi-Ollennu, group lead and robotics engineer at the NASA-Jet Propulsion Laboratory; fellow of the United Kingdom’s IET and the Royal Aeronautical Society; and a designer of the Mars Rover Lander. Dr. Trebi-Ollennu’s research focuses on planetary rovers.

“It was exciting to see these young students, some of the children in their third grade, interact with scientists, engineers, and inventors, as well as older students from the all-female Spelman College in Atlanta, Georgia […] who placed third in a national robotics competition at Microsoft in November 2014,â€ said Dr. Mensah.

“The Spelman ladies were on hand to demonstrate a humanoid robot they had built which is nicknamed ‘Spice.â€ The high schoolers were also impressed by the commercial drone shown by Bill Blackwelder.â€