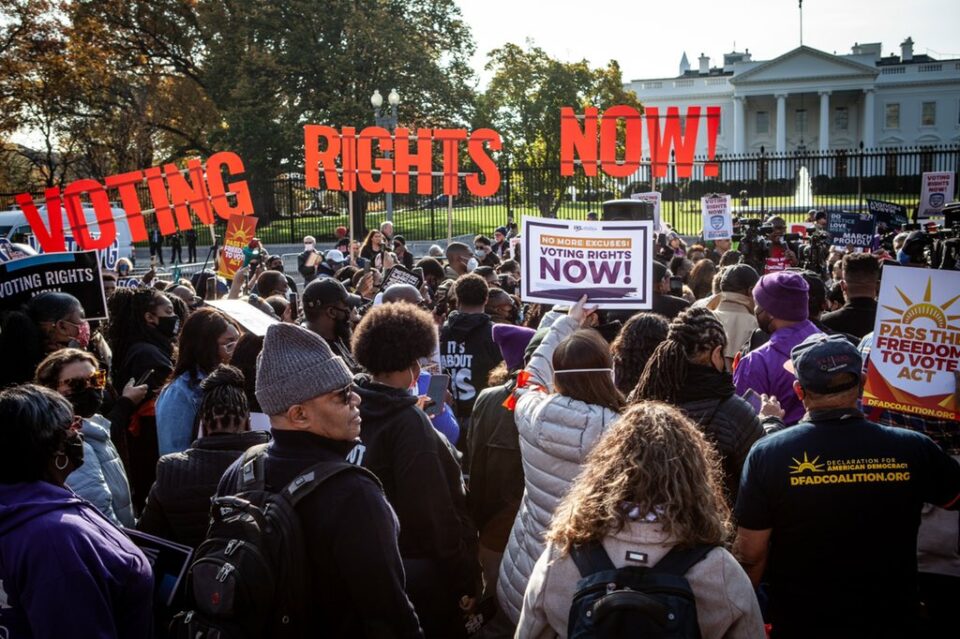 Hundreds were arreasted in front of the QWhte House onthe seocnd day of protests for voting rights. (Image: Twitter/@IndivisibleTeam)

Hundreds of protestors marched down Black Lives Matter Plaza to the White House, where they demanded President Joe Biden make “no more excuses” for not passing voting rights protections.

According to Yahoo News, more than 100 protestors were arrested outside the White House Wednesday, who added a slow down in processing led to many sitting outside in the cold. While Biden has often supported and discussed the need for a comprehensive voting rights bill, he’s done little to pass it as Republicans have blocked voting rights legislation twice.

Now, civil rights groups and protestors are putting more pressure on the White House, which is still celebrating the signing of Biden’s infrastructure bill.

“Mr. President, we want you to succeed and we will stand with you, but we need you to fight against the filibuster because [it] is being used to fight against us and bring down our democracy,” Dr. Rev. William Barber, one of the organizers of the mass protest, said standing alongside the crowd of demonstrators. “We also need you to invite us in to talk to you in the White House. You need to bring religious leaders and women activists and poor and loneliest people—the people you say you care about—you need them in the Oval Office.”

The passing of Biden’s bill was supposed to be an opportunity for Biden’s White House to show Democrats their belief in him was well-founded. However, Republicans, with the help of Democratic Sens. Joe Manchin (D-W.Va.) and Kyrsten Sinema, have cut into the bill, and now staples of the bill including climate change, child care, and housing are pending.

Barber was among those arrested by the National Park Service Thursday and said he believes the delay in processing the protestors was a deliberate attempt to discourage future protests.’

Biden isn’t the only Democrat being pressured on voting rights. The National Urban League, NAACP,  and the National Action Network have released a report, grading lawmakers on their voting record and saying U.S. politicians are failing them.