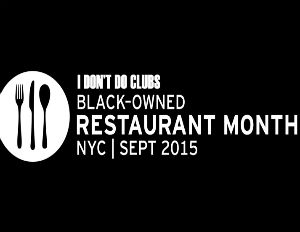 “Black Americans are just 13%Â of the U.S. population and will have a buying power of $1.4 trillion by 2019.â€ But how much of that is flowing back into our communities? This is the question that empowered I Don’t Do ClubsÂ Founder Genese Jamilah to take matters into her own hands and launch Black-Owned Restaurant Month, aÂ curated list of black-owned eateries offering guests a $35 three-course prix-fixeÂ dinnerÂ from September 9, 2015 thru September 30,Â on Mondays, Tuesdays, and Wednesdays.

From New York and Miami to Los Angeles, and even along the crystal clear shores of Tortola, British Virgin Islands, cities across the nation are known for hosting restaurant week promotions–in which diners have a chance to experience aÂ $40 or lessÂ prix fixe menu at some of the city’s finest restaurants. But highlighting black-owned restaurants also allows restaurateurs to recycle money back into the black community.

Jamilah is no stranger to taking action on issues that matter. Just this summer, I Don’t Do Clubs began the mission of highlighting black-owned businesses around the country. In just a few months, the list went viral withÂ 388,866 readers targeting the New York City, Washington, D.C., and Atlanta areas. But don’t worry,Â in typical ‘Girl Boss’ style, JamilahÂ is not finished yet.Â She has plans to cover every major city in America.

Jamilah, who is also the Digital Production Manager of iconic EBONY Magazine, was raised to always support black businesses by her parents, Mr. and Mrs. James L. Cage, in Stone Mountain, G.A. Jamilah told Black Enterprise exclusively, “This passion was reignited last year with the #NotOneDime campaign to boycott Black Friday purchases in protest of the grand jury decision not to press criminal charges against Darren Wilson for the shooting death of Michael Brown in Ferguson, Missouri.â€

I Don’t Do ClubsÂ is the premier online solution for young urban professionals who are looking for social events beyond the typical nightclub scene.Â The online destination will launch Black-Owned Restaurant Month (#IDDCBORM) in New York City and Brooklyn.Â Check out a few of the participating restaurants and book your reservations today.

If you’re a black-owned restaurant, send Genese Jamilah an email at blackowned@idontdoclubs.com to learn how to participate.