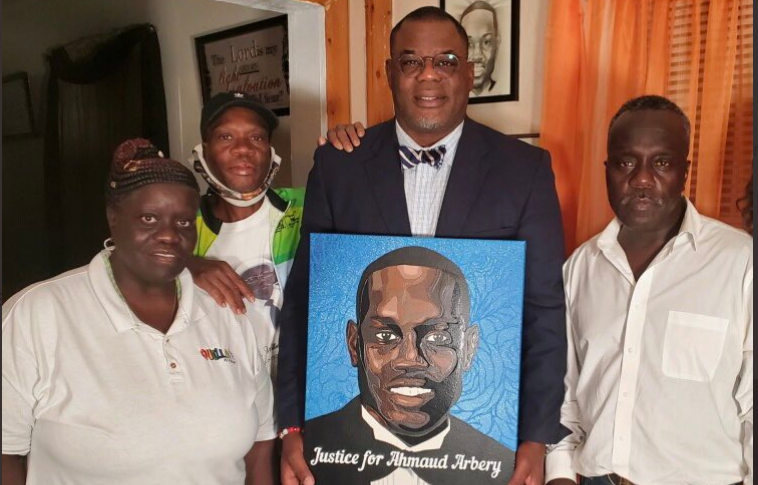 Last week, as jury selection continued for the trial of Ahmaud Arbery’s killers, his father Marcus Arbery led a group of supporters back to the street where Ahmaud took his last breath.

The somber visit took place after days of peaceful protests at the Brunswick, GA courthouse where the trial is set to take place, some 10 minutes away. The elder Arbery has been leading the vigil with support from his sisters Ruby and Diane, and volunteers from the Transformative Justice Coalition. As difficult as it may be, he says the burden of community leadership is one he’s willing to shoulder.

“That’s what a dad’s supposed to do. Step up,” Arbery told the Atlanta Journal-Constitution. “He can’t talk no more. He’s in a grave. Why? Because of his skin color. But he’s got a strong daddy and I’m gonna fight to the end for him.”

In the months leading up to the trial of the three men charged with Ahmaud’s death – Travis McMichael, Greg McMichael and Roddie Bryan – his extended family and their supporters have been able to get two laws changed in Georgia. In June 2020, Gov. Brian Kemp signed a hate crimes bill, citing the protests around Ahmaud’s death and that of Rayshard Brooks as a catalyst for the bipartisan law. Then in May of this year, Kemp repealed the citizen’s arrest law the McMichaels attempted to use as justification for their actions in this case.

Both Ahmaud’s mother Wanda Cooper-Jones and his sister Jasmine Arbery were present to witness Kemp’s repeal.

While last week was not the first time he visited the neighborhood where his son was killed Marcus Arbery says it wasn’t any less painful.

“It gets no easier going to where you lost your child at,” he explained. “I lost my child to three white men. I can’t really explain that. I can’t tell you what that’s like. I’m still mad and I’m still emotional and I’m going to be like that for the rest of my life. That’s something that I will never forget. And I will never forgive those three men.”

After two weeks, only 36 of the 64 potential jurors needed for the upcoming trial have been selected. Once the attorneys settle on the full number, they will whittle it down to a selection of 12 and four alternates.