Ice Cube Takes Off On U.S: Black America Should Be Exempt From Paying Taxes, Our Bill Is Already Paid 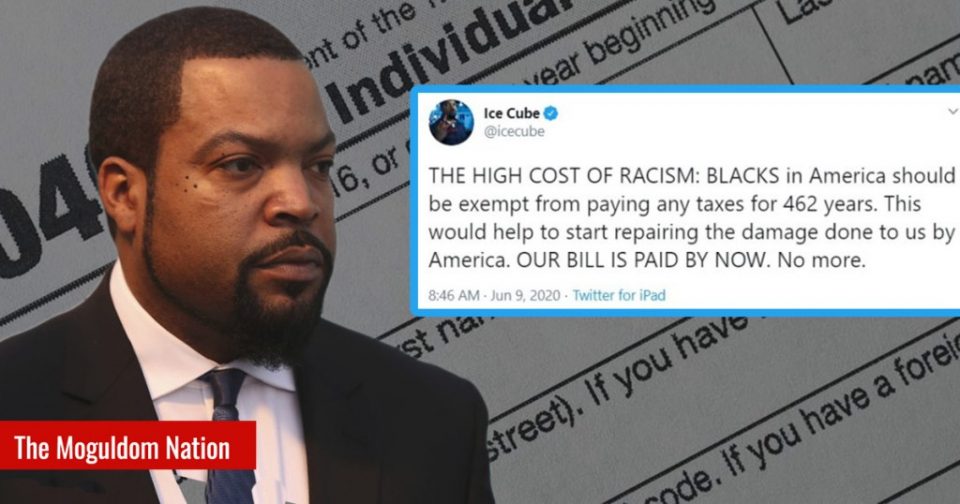 For decades, many in the Black community have felt Black people should not pay taxes. Over the years, some have pushed the so-called “Black Tax Credit.” Some tried it. Of course, the IRS wasn’t in agreement. It was reported as a tax scam. But now hip-hop mogul Ice Cube, 50, wants the IRS to exempt Black people from paying taxes.

“THE HIGH COST OF RACISM: BLACKS in America should be exempt from paying any taxes for 462 years. This would help to start repairing the damage done to us by America. OUR BILL IS PAID BY NOW. No more”, Ice Cube tweeted.

In another tweet, he wrote, “We will ask for board seats, hefty shares of the company and you will pay a heavy-heavy fine for what you’ve done. Or we will ask the believers in justice. To not support your business for 40 days & 40 nights … WE DONT REALLY GIVE A F–K IF WE WE’RE BEING FAIR OR NOT. Hos-style is my style!”

Additionally, Cube shared a video of Michael O’Meara, the president of New York state’s group of Police Benevolent Associations. During a recent news conference, O’Meara said that the media, legislators, and others have been trying to “shame” police officers since Floyd died, and officers are being treated like “animals and thugs,” Atlanta Black Star reported.

“YOUR TAX PAYER DOLLARS PAY FOR THIS TYPE OF TREATMENT,” he posted. “But the whistle blowers are the bad guys? How? Truth is anti-police?”

Cube has been very vocal on Twitter since George Floyd’s death on May 25 at the hands of Minnesota police. So upset was Cube that he recently opted out of an appearance on “Good Morning America” to promote his new music business comedy, “The High Note.”

He tweeted at 5:37 a.m. the morning of the interview, “I apologize to everyone expecting to see me on Good Morning America today. But after the events in Minnesota with George Floyd I’m in no mood to tell America, good morning.”

Speaking out against police brutality and racism isn’t new for Cube.

“Early records like ‘Straight Outta Compton’, ‘AmeriKKKa’s Most Wanted’ and ‘The Predator’ are the sound of a man wrestling for control of the narrative about his own community,” NME reported.

“In the early work, it was important to try to convey a message in movies,” Cube told NME. “Then I got to a point where I felt, you know, my music is hardcore. I’m talking about a lot of shit that’s real depressing. People want to laugh, man!”

Cube started screenwriting with the1995 stoner hit comedy “Friday.” Sequels followed. Hollywood seemed to love Cube — and vice versa.  In fact, he is the “only actor to have at least five highly-successful movie franchises (‘Friday,’ ‘Barbershop,’ ‘Are We There Yet?,’ ‘Ride Along,’ and ‘21 Jump Street’),” Pride Publishing Group reported.

Cube said he started to lean towards comedies “because people want to escape when they go to the movies.”

Prior to the death of Floyd, Ice Cube tweeted about the candidates in the upcoming presidential election. “Hold the Black vote hostage until one of ’em comes with A Black Agenda that we’re satisfied with. It’s not our job to fix the country’s mess until we fix our mess…#fuckyoupayme.”

That tweet was in response to Joe Biden’s comment on The Breakfast Club, when he told Charlamagne tha God, “if you have a problem figuring out whether you’re for me or Trump, then you ain’t Black.”

Following the tragic death of Floyd, Cube again turned to Twitter on May 28 to call out the police. He wrote: “How long will we go for Blue on Black Crime before we strike back???”

“Ice Cube continues to represent the best of the genius of hip-hop that transforms the world into a better place for (those) who cry out for freedom and justice,” said Dr. Benjamin F. Chavis, Jr., president of the National Newspaper Publishers Association, Pride Publishing reported.

THE HIGH COST OF RACISM: BLACKS in America should be exempt from paying any taxes for 462 years. This would help to start repairing the damage done to us by America. OUR BILL IS PAID BY NOW. No more.

What scary RACIST don’t know. Treat us fairly and you might not see us to much. Our neighbors will be nice and livable full of excellence and opportunity. The country owes us 400 years of backpay.