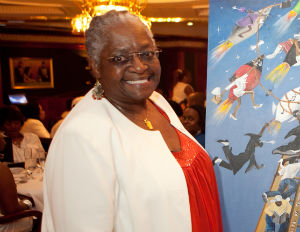 According to reports, international artist and civil rights advocate Annie Lee, known for her skills and passion for celebrating and commemorating African American culture, died Nov. 24 in Henderson, Nevada. She was 79 years old.

Lee has left a legacy of iconic artwork, predominantly featuring African American life from various perspectives. She had a multitude of talents, included the ability to capture one’s emotions in paintings, and is most widely known for depicting images without faces. Her two most popular pieces of work are My Cup Runneth Over and Blue Monday.

Lee grew up in Chicago and started painting at age 10. She later attended Northwestern University. Despite difficulties including losing two husbands to cancer, she stopped painting early on her career and only resumed again when she turned 40. The artist was a huge supporter of raising money for Black colleges and universities. She is survived by her daughter Davina Joy and son Charles, along with grandchildren and great grandchildren.