In September 2008, Carmen Belcher, 25, checked her Bank of America debit card account statement online. Expecting nothing unusual, she was stunned to see two transactions from a clothing store and a cell phone provider she didn’t subscribe to. Belcher contacted the retailer and learned the name and address of the person who attempted the transaction. Though she didn’t recognize the exact address, she did recognize the last name; it was that of a friend she met while enrolled at Hampton University and with whom she frequently spent time.

“I was shocked she would steal from me because she had the same material things I had, so I thought there was no competition,â€ says Belcher, an aspiring entertainer and assistant to a music industry representative. “As I understood it, she didn’t work because her parents paid her graduate school tuition.â€

Belcher’s former friend charged approximately $300 to pay a cell phone bill. (The clothing store purchase, which was attempted online, failed to go through. Belcher was told it was because the shipping address did not match the billing address.) But Belcher, who says she rarely checked her bank statements,Â  was unable to get her money back. She missed the 60-day period that Bank of America requires for reporting fraudulent activity. Her former friend had also moved out of the country by the time Belcher discovered the charges.

Unfortunately, Belcher is not alone. In 2008, almost 10 million people in the United States discovered they were victims of identity fraud, according to Javelin Strategy & Research, a provider of quantitative research on financial services. Identity theft might be the last thing on the minds of college students. This makes them an attractive target for thieves, who wait for them to unknowingly leave behind a trail of personal information, either online or within physical reach.

“People don’t realize or think about how much information they give away,â€ says Linda Foley, the founder and chairman of the Identity Theft Resource Center (www.idtheftcenter.org), a San Diego-based nonprofit organization that educates consumers and supports victims of identity theft nationwide. “Identity theft can affect a student’s ability to get a college loan, credit, or a job.â€

It doesn’t help that there is no standard profile for an identity thief. In fact, victims aged 18 to 24 years old are more likely to know those who’ve defrauded them; sometimes the thief may even be someone close. Belcher’s friend knew her shopping habits and was one of the few people Belcher invited to stay over at her apartment.

Javelin Strategy & Research states in its 2009 Identity Fraud Survey Report that of the 35% of victims who know how their information was taken, 43% of the crimes were committed through physical contact, such as the stealing of a wallet, checkbook, or credit card. “Dumpster divingâ€ and “shoulder surfingâ€——using direct observation techniques, such as looking over someone’s shoulder or even using vision-enhancing devices——are also common methods used to steal personal and financial information.

According to Foley, you can’t prevent identity theft, but you can take precautions. Belcher now shreds documents and doesn’t carry all her credit cards with her. When she has overnight guests she now removes important documents from a filing cabinet located in her easily accessible home office. “It’s hard because you don’t expect people to steal from you, but the only way to really protect yourself is to always be on top of everything,â€ she says. 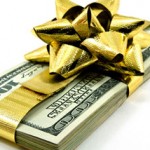 With Tight Budgets, Creativity Key in Tipping for Services