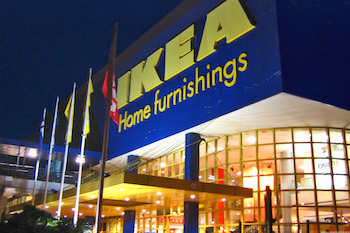 IKEA, the Scandinavian furniture chain store giant, served a controversial menu to customers and employees in Atlanta to honor Juneteenth, according to CBS46.

According to the news station, the menu options in question were fried chicken, watermelon, mac and cheese and collard greens. Food like chicken and watermelon became a racist trope after the Civil War and slaves won their freedom and grew and sold the fruit as they gained self-sufficiency. It also became a symbol used largely by Southern whites to call Blacks lazy, unclean heathens.

But someone at IKEA apparently didn’t get that memo.

“They sent the menu to us in emails,” an anonymous employee said.

Although employees in the interview did not want to appear on camera, they told the news station that management should make an effort to expand their knowledge about Black culture.

“You cannot say serving watermelon on Juneteenth is a soul food menu when you don’t even know the history–they used to feed slaves watermelon during the slave time,” another anonymous employee told CBS46.

After 33 people called out from IKEA’s work schedule, according to the account of events provided by employees at a store in Atlanta, an internal email response was sent with an apologetic tone from the manager.

According to CBS News, employees felt the menu’s creation should have been inclusive of  voices of color, before it was given the green light. Collard greens, corn bread, mashed potatoes and meatloaf still appeared on the amended menu. Customers  shared the sentiment that the menu was offensive.

In contrast, The Food Network went to greater lengths to teach about Juneteenth menus, while integrating food into the conversation. The company consulted with African American content producers, too.

“Today is Juneteenth! In honor of this important holiday, host Michiel Perry (aka Black Southern Belle) and some of her favorite chefs have been building a menu for a Lowcountry Juneteenth, the celebration of freedom and heritage,” The Food Network’s Facebook page explained.

Black Southern Belle’s website identifies Perry as the developer of a lifestyle brand which integrates African-American women and the Southern connection.

IKEA has faced backlash before.

In 2020, the company removed a catalogue image, because it could have been construed as racist. It was assessed internally, then IKEA took action. According to the New York Daily News,  an employee pointed out that numbers which were included on the back of a t-shirt worn by a young Black male in the advertisement could be associated with prison. In response, IKEA erred on the side of caution and modified the image, causing the 2021 catalogue to be delayed.