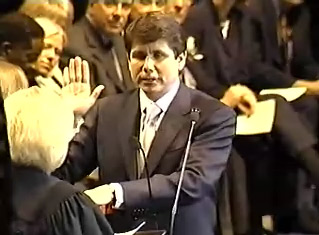 Rod Blagojevch is sworn in as governor on Jan. 13, 2007, in Springfield, Ill. (Source: Governor’s Office)

Illinois Gov. Rod Blagojevich and his chief of staff, John Harris, were arrested today by the Federal Bureau of Investigation on federal corruption charges.

Blagojevich, 51, and Harris, 46, were each charged with conspiracy to commit mail and wire fraud and solicitation of bribery. They were charged in a two-count criminal complaint that was sworn out on Sunday and unsealed today following their arrests, which occurred without incident. Both men were expected to appear later today before U.S. Magistrate Judge Nan Nolan in U.S. District Court in Chicago.

Specifically, Blagojevich, a Democrat, was accused of conspiring to sell or trade the Senate seat left vacant by President-elect Barack Obama in exchange for financial benefits for the governor and his wife, according to the Chicago Tribune. The governor was also accused of obtaining campaign contributions in exchange for other official actions.

In a 76-page affadavit, the government said that Blagojevich was caught on tape at various times discussing what he would need in exchange for the Senate appointment. He is heard discussing a substantial salary for himself at a either a non-profit foundation or an organization affiliated with labor unions; placing his wife on paid corporate boards where he speculated she might garner as much as $150,000 a year; promises of campaign funds – including cash up front; and a cabinet post or ambassadorship for himself.

In an interview last week, Blagojevich told the Chicago Sun Times that Obama’s replacement in the U.S. Senate does not have to be an African American, and he is open to selecting someone who would serve only the two years left in the term.

U.S. Attorney’s office spokesman Randall Samborn said both Blagojevich and Harris were arrested Tuesday. Blagojevich was taken into federal custody at his North Side home this morning.

The arrest came amid news that investigators had recorded the governor with the cooperation of a longtime confidant and had begun to focus on the possibility that the process of choosing a successor to Obama could be tainted by pay-to-play politics.

The affidavit said Blagojevich was frustrated at being “stuck” as governor and that he would have access to greater resources if he were indicted while in the U.S. Senate than while sitting as governor.

“The breadth of corruption laid out in these charges is staggering,â€ said U.S. Attorney Patrick J. Fitzgerald. “They allege that Blagojevich put a ‘for sale’ sign on the naming of a United States Senator; involved himself personally in pay-to-play schemes with the urgency of a salesman meeting his annual sales target; and corruptly used his office in an effort to trample editorial voices of criticism. The citizens of Illinois deserve public officials who act solely in the public’s interest, without putting a price tag on government appointments, contracts and decisions,â€ he added.

Among those being considered for the Senate post include U.S.