Illustrations of Viral Black Fetus Will Be Published In a Book 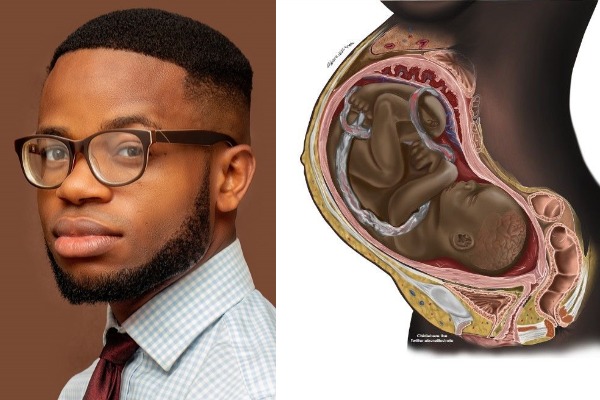 The Nigerian artist who went viral last December with his illustration of a Black mother carrying a fetus will have his artwork included in a clinical handbook.

Chidiebere Ibe has been invited to include his illustrations in the second edition of Mind the Gap: A clinical handbook of signs and symptoms in Black and Brown Skin, CNN reports. His inclusion in the textbook comes one month after the Nigerian first-year medical student received widespread praise for releasing what many said was the first time they saw a drawing of a dark-skinned fetus.

Ibe was surprised by all the attention, saying it was “just one of my drawings to advocate for diversity in medical illustrations.”

Ibe’s drawing raised debates around the lack of diversity in the illustrations used for medical pathologies and procedures in textbooks and scientific journals.

Now the 25-year-old creative director at the Association of Future African Neurosurgeons has caught the attention of medical professionals around the world. Malone Mukwende, a medical student in London and co-author of Mind The Gap, is applauding Ibe for shining a light on the implicit biases that exist in the industry.

“Chidiebere’s work … unearths some of the biases that exist in medicine in plain sight that we may not be aware of,” Mukwende said.

“Representation in healthcare is imperative to ensure that we do not allow implicit biases to cultivate in our heads.”

After obtaining a chemistry degree in Nigeria and studying medicine in Ukraine, Ibe sees the need for more inclusive textbook illustrations. Ibe says the lack of illustrations of skin conditions in Black skin makes it hard for medical students to diagnose them.

He’s excited to take part in Mind The Gap, a textbook he says will create “the blueprint for the world” in terms of what diverse medical textbooks should look like and serve as “the go-to textbook for representation of a variety of skin tones.”