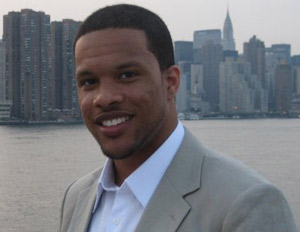 Along with Emil Anticevic and Thomas McLeod, Patrick Jackson, 25, founded Imaginary Feet in 2009. Since then, the technology trio have developed several mobile applications, including two Top 10 photography apps called SpyPic and SpyVid, which collectively have over 180,000 downloads. In a short time the company has carved out its own niche in the industry, thanks in part to popular games like Cooties, which has over 75,000 downloads and an average playtime of 12 minutes per user, and ControlShift, which pays homage to the old school retro arcade games of the past. Recently relocating from the Washington, DC area to San Francisco, Imaginary Feet’s latest product is Crosswalk, which aims to solve iOS app discovery. BlackEnterprise.com caught up with Jackson to discuss his career in the gaming industry past, present and future.

What inspired you to enter the gaming industry?

In my senior year at Howard University I took a game development course and it really opened my eyes to the gaming industry. My professor, Dr. Todd Shurn, was adamant that we learn the technical as well as the business aspects of gaming. Before we wrote one line of code we studied the business models of successful games. I was amazed to learn the gaming industry is more profitable than the movie industry. We studied the success of the massively multiplayer online game [MMOG], World of Warcraft, and explored the different revenue models like pay-per-consume and subscription.

Before co-founding Imaginary Feet how did you get your start in the gaming industry?

I previously worked for the National Security Agency (NSA) in Fort Meade, MD for five years. My job title was Research Computer Scientist and my focus was emerging mobile and wireless technologies. Working for the NSA was an amazing experience; I traveled all over the world, worked in a cutting edge research lab, and had brilliant colleagues. Although I truly enjoyed my time at the agency I knew that chapter had to close in order for me to fully tackle my entrepreneurial aspirations.

When did you start making the transition?

Imaginary Feet broke into the gaming industry when we developed and released our first game. We started development on our first game Cooties in October 2010 and made its debut in the Apple App Store on April 12, 2011. Unlike our other consumer driven/niche products, gaming represented a brand new territory. With niche products the goal is more verifiable and easier to know when achieved. For example, with our SpyPic app, it either does or doesn’t enable a user to take photos secretly. Gaming is much more subjective.

You hope to create something that users will find fun and engaging. We knew it would be a challenge developing games but also realized that there is no better way to learn than doing. Although I took one gaming course while studying computer science at Howard University, the best way to learn your way through the industry, I think, is by trial and error. The truth is you’ll never know what the outcome is of any idea until you execute it.

What was the biggest obstacle you had to face while trying to move up in the industry? How did you overcome it?

The biggest obstacle I’d say is remaining focused and determined even through the turbulent times. The fact is, not every idea is going to be successful. It’s all about what you learn from failures and how you apply that knowledge in the future. Despite what you may read in headlines, success doesn’t always happen overnight. Rovio, the creators behind AngryBirds, developed games for eight years before they had their huge success. Learn from your failures, persevere, and keep iterating.

What other advice do you have for people interested in doing what you do for the gaming industry?

My advice to people interested in getting in the gaming industry is action. Start now. There are tons of resources online on how you start building games for mobile devices. Don’t know much about math or physics? It’s okay! Cocos2d is a free [open source] game engine that abstracts most of the low-level technical details and allows users to focus more on the story and game play.

What can you tell our readers about your latest project Crosswalk, which aims to solve iOS app discovery?

Right now iOS app discovery is broken. Yes, Apple does a good job of telling you the top 10 most profitable games but it doesn’t tell you the games that are popular within your social circle. That’s how people find out about apps–they ask their friends. We developed Crosswalk to make the App Store social. It produces the absolute best recommendations on what to download based on what apps your friends–and even influencers–have and love on their phones.

What have been some of Imaginary Feet’s most notable products?

Our company primarily generates revenue by selling products that solve a consumer need. Our first product was pagelime, a lightweight content management system for designers. Pagelime enables clients to make quick and easy edits to their Web page without any knowledge of HTML or FTP. The solution powers more 20,000 Websites with paid plans ranging from $19-$69/month.

We then ventured into developing mobile apps and games for the iOS platform. We initially targeted niche photography needs by developing secret photo and video recording apps SpyPic and SpyVid. Our most successful photography app is Frametastic, which enables users to place multiple photos into one single frame. Our personal passion for gaming led us to build two iOS games–Cooties and ControlShift.

I want to make software development cool. It’s important for the youth to see there are other paths to success that don’t always include music, athletics, or entertainment. There’s nothing wrong with those career paths but I want entrepreneur or software developer to be listed amongst them.

In regards to your career thus far, what are you most proud of?

I feel accomplished that I’ve tackled many challenges throughout my life. At age 20, I started working for one of the most secretive intelligence agencies in the world. During my five year tenure at the NSA, I was challenged daily with seemingly impossible problems and worked hard to solve them. I traveled all over the world and worked with so many amazing people. At age 25, I embarked on my entrepreneurial journey full-time, which has always been a major goal of mine.

As part of the Crosswalk launch, Imaginary Feet is offering a special offer for the first 250 users to join. Just click here.