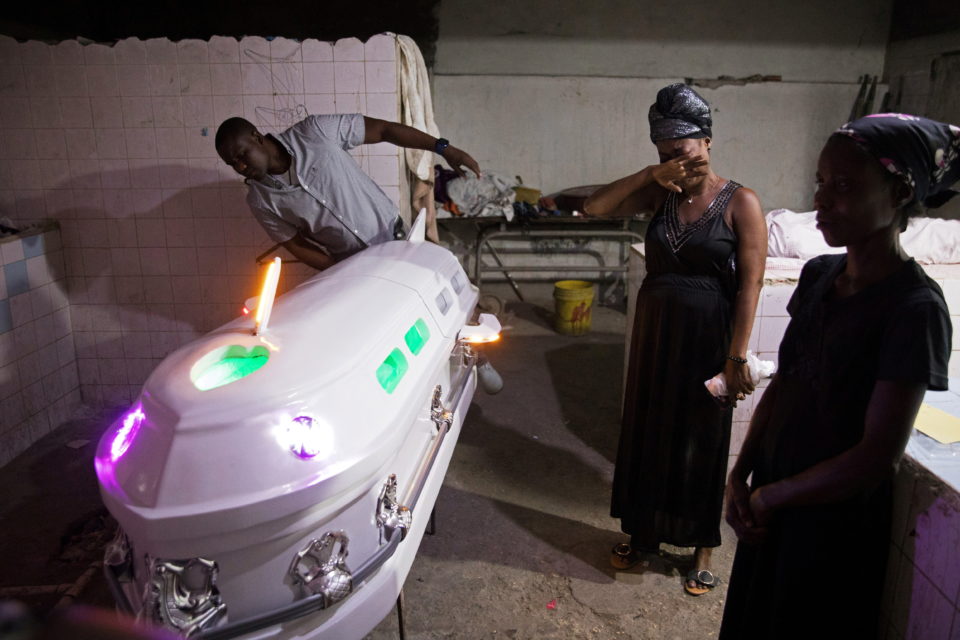 Sisters Fredeline Alfred and Carine Alfred are shown the lights for the airplane-shaped coffin chosen for their recently deceased mother, Anaira Jules, at a morgue in Saint-Marc, Haiti, April 17, 2021. Jules who lived her whole life in a small hamlet in rural Haiti,?had never set foot on a plane. But for her last journey, she was sent off in a gleaming white, plane-shaped coffin complete with a wing-tail and illuminated portholes. "Ever since I was little, my mother would tell me it was important for her that her funeral go well," said Jules' youngest daughter, Fredeline. REUTERS/Valerie Baeriswyl

GRAND-BERA, Haiti (Reuters) – Anaira Jules, who lived her whole life in a small hamlet in rural Haiti, had never set foot on a plane. But for her last journey, she was sent off in a gleaming white, plane-shaped coffin complete with a wing-tail and illuminated portholes.

Mourners fell into trance-like states or wept at the church funeral service for the 77-year old in Grand-Bera, in Haiti’s central department of Artibonite. A marching brass band afterwards accompanied the large procession that carried the plane-coffin to the cemetery.

The night before the funeral, around 200 people played dominos and cards, drank ginger tea and clairin – Haiti’s rustic, rum-like spirit – and ate local dishes under a tarpaulin outside the family house as a DJ played evangelical music.

“Ever since I was little, my mother would tell me it was important for her that her funeral go well,” said Jules’ youngest daughter, Fredeline Alfred, 30. “My elder sister was in charge and she likes showing off.”

A festive wake and a lavish funeral with a display of dramatic emotions and fanfare bands – these are just some of Haiti’s death rites, which, like its weddings, are often extravagant social events despite the country’s poverty.

The rites are viewed as important to guarantee a safe passage to the afterworld – with cremations and organ donations rare because the deceased are deemed still to need their bodies – but also a way to mark one’s social standing.

Traditions from the Afro-Caribbean religion Voodoo are often mixed with Christian ones. Voodoo undertakers – called croque-mort (‘dead-biter’ in French) – prescribe what families need to place in the coffins in order to assure a safe journey and ensure the dead are not turned into zombies.

Alfred said her family did not hold a funeral until three weeks after her mother’s death, as they needed time to repaint her house to receive guests and build a new tomb.

They rented a bus to transport guests from out of town, set up a tarpaulin in the courtyard, and put out tables and chairs for the wake, which is typically a festive affair in Haiti where mourners may choose to dance, sing or tell jokes until dawn.

For several days after the funeral, people continued to congregate there.

Yolvida Desruisseaux, 28, who recently buried the father of her godfather, said this tradition of turning a funeral into a multi-day social event was a balm to the soul of mourning families.

“The family is sad but it’s good to have this kind of ambience so we can smile a bit,” she said. “The guests sometimes help us with tasks in the house and chat with us to help us get through the worst.”

At the cemetery where her godfather’s father was buried, one mourner shot bullets into the air – a sign of respect.

Haitians dress the corpses of their loved ones for funerals with an ease that perhaps reflects their familiarity with death.

Disease, malnutrition and natural disasters are rife in the Caribbean country, while healthcare is poor, leading to the highest infant and maternal mortality rates in the Western Hemisphere. The average life expectancy is just 64 years old.

In families that follow Voodoo rites – estimated to tally more than half of Haiti’s 11 million people – the croque-mort helps to prepare the body for burial.

Feguenson Hermogene, a 32-year old sociologist who recently buried his aunt, said stones were placed in her hands in her coffin to help her combat any evil spirits that may wish her harm.

“You can also include a knife or a machete,” he said, describing the croque-mort as like “a doctor who gives you a prescription.”

Hermogene said that in rural areas where there were no morgues, the croque-mort would also know how to embalm the body with leaves. Offerings to the Voodoo spirits – grilled corn, yams, soda, sweets – are typically laid out on a table.

There was a lot of social pressure to provide an impressive send-off, said Hermogene. And while there was solidarity, with people coming to cook or contributing food, that didn’t come close to offsetting the costs.

Alfred said the funeral alone cost her family the equivalent of $2,122, while the wake cost another $3,000 – a fortune in a country where two-thirds of the population make less than $2 per day.

Oftentimes relatives in the diaspora will help, asking to be zoomed into the funeral by videocall, but other times people will go into debt to pay the costs.

Alfred said she struggled to pay rent and feed her family after paying so much. But it was all worth it for her mother.

“The last time she spoke to me,” she said, “she held me in her arms, and told me she would never stop loving me.”