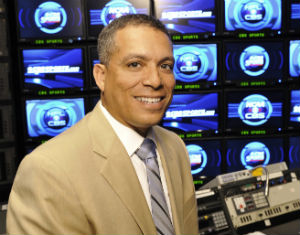 One morning earlier this spring Harold Bryant, just weeks removed from Superbowl XLVII, was revving it up yet again, this time making an appearance at Manhattan’s Le Parker Meredien for CBS Sports’ media day leading up to the NCAA Tournament. It’s the kind of event Bryant, who oversees all creative aspects of production and editorial content of all sports programming across CBS’ platforms, should definitely attend, if only because of the all-encompassing nature of his title. Had he not shown up, it was hard to tell who would have noticed, what with Jim Nantz and former NBA stars Reggie Miller, Steve Kerr, Steve Smith and Kenny Johnson making the rounds. All media eyes were especially on Charles Barkley who, when prompted to give a recollection of what it was like to work with Bryant, deadpanned they don’t really work together. “But he’s a good drinking buddy.â€

None of the CBS folks in the room were far removed from the the Super Bowl: Thirty-six days earlier, a power outage infamously darkened the Mercedes-Benz Superdome after a show-stopping performance of literal and figurative proportions by the artist BeyoncÃ©. Deep into the tournament on March 30, Louisville sophomore guard Kevin Ware crumpled to the ground with his tibia broken in half and protruding out of his leg for all to see. And at The Masters, word would spread across the grounds early Saturday at Augusta National that Tiger Woods might have played himself out of the weekend after an errant drop.

Insiders at the network say Bryant’s focus, resolve and signature calm was on display at each fork in the road. Many say Bryant is among the most respected executives at the network, a communicator with a special skill set who everyone trusts.

“It is very helpful that you’re calm under pressure, because there is a lot of it when you’re presenting live sporting events,” says Sean McManus, Chairman of CBS Sports, when asked if composure is his executive producer’s strongest trait. “But his organizational skills and his understanding of what makes good television is actually just as important as his demeanor in the control room. The fact that he has such a good eye for what is compelling and what can be better in the shows that we produce, whether it’s NFL football, SEC football or NCAA basketball — he’s just got a really good sense of what works, and he’s terrific at working with people and getting the best out of them.”

“But it is helpful when it seems like the world is coming to an end during a live show.â€

Unexpected challenges, tailor made for a vet’s composure

Sitting with Bryant at a table littered with water, coffee and orange juice on media day was Nantz, the venerable announcer; Lesley Visser who, for all of her talent, seems to not age; a bespeckled Clark Kellogg, all arms and legs, prophesizing to a room of national reporters some stuff about a little-known school named Florida Gulf Coast doing damage in the tournament. Out of politeness, onlookers did not groan for the bombast. And all that team did was destroy Georgetown and San Diego State on its way to the Sweet Sixteen. In this company — Nantz, Kellogg, Visser, Brains, Poise, Polish — was comfortable, authoritative.

“The thing about Harold is, to do a broadcast he’s got to have hundreds of people that need be on the same page,â€ gushed Nantz. “That takes a particular skill set and sense of leadership that’s just not that common these days. He’s someone we all trust.â€

For all of the ways to tell Florida Gulf Coast’s cinderella story, the tournament became known for something more tragically poignant when Ware, the Louisville guard, broke his leg in Indianapolis. During that gruesome and utterly heart-wrenching sequence, Bryant was on a direct line to McManus, orchestrating by what all accounts was a masterful handling of what is one of the biggest stories of the year in live sports.

“It was an unexpected news story for CBS Sports, filled with production pressure, and I thought they handled it well,â€ wrote Sports Illustrated media critic Richard Deitsch, an authority in sports media circles. “The production quickly moved off the video of the play (there were only two replays) to tell the surrounding story: fans, teammates and coaches crying, opponents reacting with horror,â€ he continued. “CBS cameras followed Ware being removed from the arena and did so with proper distance. The network opted — smartly — to stay with the scene rather than go to commercial.â€

Bryant says it was evident that the story would tell itself, which is likely why CBS focused on reaction shots: Wayne Blackshear and Russ Smith’s tears, Peyton Silva’s disbelief, Chane Behanan’s prayer.

For his part Bryant takes a muted, if not reluctant, satisfaction in the favorable analysis.

“What went through my mind was if that was my son, how would I want it covered? It was important right then that we paid respect to him and the people that care about him, so I thought about his family members. I personally saw it once and didn’t want to see it. And I thought there were millions of people like me. And, you know, it was Easter Sunday. You want to show this thing properly, and make sure we were telling the story.â€

A background in television

A 1988 graduate of Rutgers University, Bryant has won 18 Emmy Awards over the span of a nearly 26-year career. Bryant began his career working for WOR-TV as a news and sports production assistant for all New York Mets home games. It bears mentioning that the Mets had just won the World Series and were the hottest ticket in New York when Bryant arrived in 1987 — the WOR-TV’s slogan for its television promo was “Let’s do it again!â€

“It was a great way to learn the industry. “It was the summer of ‘87, and I was still in college. Here I was with a front row parking pass at Shea Stadium. I could walk onto the field for batting practice and was interacting with guys like Strawberry, Doc Gooden, Keith Hernandez. It was a surreal and exciting intro to TV sports.â€

Bryant did it all as a production assistant, often jotting down stats and notes for the announcers like Hall of Fame player Ralph Kiner. Mets fans of a certain age will remember Kiner’s Korner. Well, you can think of Bryant as a kind of coordinating producer for the segment.

A theater major, he had even worked as a PA on some films and other media, but sports drew him in. “Sports really kind of said to me, ‘Wow, this is what I love.’â€

He went to work as a line producer Sports News Network. The network went dark in December 1990 for financial reasons, and for the next five years, he was production assistant at NBC Sports where he worked three seasons of NFL and NBA, as well as the 1992 Olympic Summer Games. From 1994 to 1996, he produced features for Atlanta Olympic Broadcasting, the international broadcaster of the Summer Games in 1996.

In June of 1997, he joined CBS Sports as an associate Producer in June 1997. He assumed his role as executive producer in August 2011 after nearly three years as VP of production.

His secret to success?

“One of the things I always tell people is you have to focus on preparation and the details.” he said, seeming to resent the simplicity of the lesson. “It sounds cliche but if you are prepared … if you’re the producer and you know all the storylines, or if you’re the PA and you know all the footage and the stats… As long as you’re prepared you will do well in the heat of the battle.”

Big business at CBS Sports, an even bigger responsibility at home

This year, CBS Sports’ programming pitted almost back-to-back-to-back the Super Bowl, the Men’s NCAA Basketball Tournament and The Masters. It means Bryant, 47, is among the most powerful television sports media executives in the country, and one of the highest ranking African Americans at CBS.

As hoped by CBS brass and shareholders, the 2013 NCAA Tournament was the most-watched in 19 years, according to Nielsen. The tournament averaged 10.7 million total viewers, which was up 11 percent from 2012 (9.6 million viewers). The company’s first quarter revenue is up to $4.04 billion, according to media reports, a six percent increase from $3.8 billion year-over-year. The Super Bowl broadcast in particular helped boost advertising revenue by 8 percent; some estimates put Super Bowl ad-generated revenue at $300 million. An astounding 108.41 million viewers watched the Super Bowl. Numbers are not released by CBS, but Kantar Media estimated that last year, CBS and Turner Sports raked in over $1 billion in ad revenue.

“What makes all of our broadcasts successful,” says Bryant, “is planning. We plan weeks, months and even years for some of these events. The tough part is making sure we have enough time to plan everything out. We have to get to the sites and survey them. We have to discuss how we place our cameras and our microphones and things like that. Also, just being on top of the next great thing. Sometimes we’re so focused on doing an event, that we don’t have to look into the new great camera or the hot new audio setup. That just comes with preparing for an event and covering other events. It’s a balancing act.â€

As he spoke, Bryant’s tone shifted.

“It can be challenging at home, too.â€ he offered. “You can be in the control room or on the road for long hours.â€

On April 29, Bryant and his wife, Sally, welcomed twin girls Olivia and Madison.

The family-life balance is a challenge for anyone at the executive level. But it’s one that Bryant seems determined to make work: his adult son, Brendan, who lives in Atlanta was with him at the Final Four. His very pregnant wife made it to the Super Bowl.

“I want to be able to provide for them the best I can, and that’s why I strive to be the best at what I do, and be a great executive producer. I certainly hope to be here at CBS for a long time, and if opportunities come along I’m going to take on those challenges and help grow our division, or departments.”

“I’ve gotten better at managing time over the years. Every month, every year, every season, I do better. It’s about understanding the schedule, organizing meetings, and working to be more efficient and not just sticking to same routine.â€

Bryant is an avid boxing fan. He took great pride in the deal CBS/Showtime landed with Floyd Mayweather Jr., but had two reasons — Olivia and Madison — to not make the fight. “You have to adjust to the changes in lifestyle,” he said, calmly, quite sure of himself.

It’s why he delegates more responsibility now, probably more than ever, aware of the opportunities afforded to him, aware of the promise of the future.