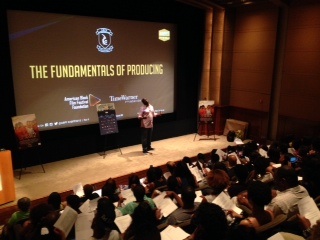 Roger Bobb, president and CEO of Bobbcat films, instructed a master class on the Fundamentals of Independent Film Production that proved to be as entertaining as it was enlightening. Attendees walked into the session and immediately received a “producing packet” detailing what would be covered in the class. The packet included a syllabus for today’s master class, a mock call sheet, script pages, and a brief bio on Bobb.

Bobb opened the session with a relaxed and engaging tone that had attendees laughing while still of the edges of their seats. He started with a brief “who I am” introduction before diving into the syllabus, which revealed that the session would cover basic principles of the production process, the basic skills necessary to be a producer, and the basic value of the collaborative process. It wasn’t long before the syllabus was completely out the window and Bobb and the session attendees transitioned into a relaxed Q & A format.

Attendees asked questions that ranged from what producers do exactly (a producer finances, identifies, develops or physically produces a film) to how they make money (they start small, do good work, and establish relationships) to whose money they spend (your own if necessary, someone else’s if you can) to how to get started as a producer (grab a camera).

Bobb encouraged attendees to utilize the resources they have around them when starting out. “Write what you have,” he advised. “If you have a dog, put that dog in the film!” When asked what makes a good producer, Bobb smiled and said, “Knowing how to watch money and how to do everyone else’s job.”