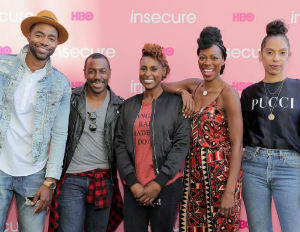 HBO hosted a block party on Sunday to celebrate Insecure, the highly anticipated, new series from creator and star Issa Rae. The experience not only featured exclusive screenings of the show, but also featured special musical performances from today’s hottestÂ acts including BJ The Chicago Kid, Kari Faux, and Kaytranada.

The block party channeled inspiration from the series, which was a nice touch–from the food served, to the music played, and even photo-ops complete with low-rider bicycles and Inglewood signs.

“The character is me, the essence is me, but I’ve never been in a lot of these situations,â€ says Rae. She explains that some situations were inspired by conversations with friends, everyday occurrences, and pure creativity. Â “Someone used the term ‘autobiographical fiction,’ and I completely identify with that.â€

“We don’t get many chances to make these shows every day, and talkÂ about what Issa is talking about; addressing cultural things, social things, and political things with humor, wit, and sarcasm,â€ says showrunner Prentice Penny.

After writing a letter to Rae and discovering that they grew up around the corner from each other, Penny realized he wanted to be a part of Insecure. He also wanted to take the lessons he learned from Mara Brock Akil, who gave him his first job, and pass those on to someone else. “To have a show that talks about our humanity, not our pain or struggle, but the minutia of our daily life, is important. And to do that and have the platform on HBO is amazing,â€ he says.

While some situations are undeniably universal, Rae and crew capture an authentic voice that many can relate to. Executive Producer and Director Melina Matsoukas made the jump to TV director with Insecure. “I say music videos are like a sprint, and this TV show has been like a marathon,â€ says Matsoukas. “With TV, you’re working with actors and performances, and really making sure that everything is motivated by story, staying true to who the characters are, and creating something really authentic and not a fantasy–at least in this show. Our show is all about authenticity and keeping it real.â€