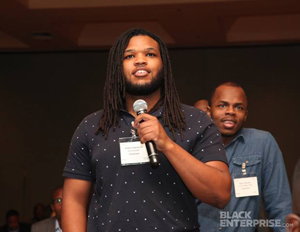 Ryan Rucker was one of the attendees at Black Enterprise’s inaugural TechConneXt Summit held in Silicon Valley. There he got the opportunity to speak with Tim Draper, founder of Draper University; and Sequoia Blodgett, a Draper University protÃ©gÃ© who appears with Draper on the ABC Family show, Startup U.

Rucker told Draper and Blodgett about his entrepreneurial idea and was told to connect with Draper four months after launching his product to discuss funding. Rucker was elated and also has a meeting with Blodgett set for March.Â Rucker’s idea is an app he calls Charmer.

At first description, Charmer sounds about as useful as another app that was set to disrupt personal communications, the Yo! app, which let friends message the word “Yo!â€ to one another. As ridiculous as that sounds, Yo! fetched $1.2 million in initial funding and had a valuation of $10 million upon its release.

Charmer has the potential to be even more disruptive. Rucker is positioning the app as a way for users to get very quick, summarized reviews about restaurants, clubs, products, and more.

“What we are trying to do is make reviews more social and more mobile. The last time I was on Yelp there were 126 reviews and I was not about to go through over 100 reviews to [learn about] a restaurant,â€ says Rucker. “[With Charmer] we are creating an atmosphere where you can describe things in three words so [users] can get a sense of location or products.â€ These three words are called Charms in the app.

Charmer is currently in prototype and the launch is slated for January–only for iOS, for now. The targeted user group for the app is 13—25 years old. In fact, Rucker is deliberately launching the app on Martin Luther King Day because school is closed.

The Morehouse graduate may be on to something big. As social media and messaging use expand, we’re communicating with one another in fewer words. That is particularly true for those under the age of 25. “We usually just talk using emojis,â€ one 18-year-old young woman told Business InsiderÂ a few years ago.

So the trend is definitely one towards less verbose communication. But how does Rucker hope to monetize the app?

“We want to monetize it based on companies who want product and consumer reviews market research. Like when Adidas Yeezys come out; everybody has something to say about them–those comments are like reviews–so we are trying to simplify the review process and increase the amount of reviews.â€

Rucker intends on modeling somewhat after Yelp and charging companies who want access to this data a monthly subscription, or the way Google offers cost-per-click. Charmer, for businesses, would generate revenue through clicks-per-charm.

Ryan is the CEO of Charmer, but there are other team members including co-founder Adam Haywood, COO; Herry Makker, CTO; and Raman Sandhu, marketing director. The four were able to build the app for under $7,000 using savings and a contribution from Rucker’s grandfather. After launch, the Charmer team will meet with potential investors to move the app forward and add features including emojis as well as a version for Android.

Nearly Half of All Small Businesses Not Using Cloud Storage