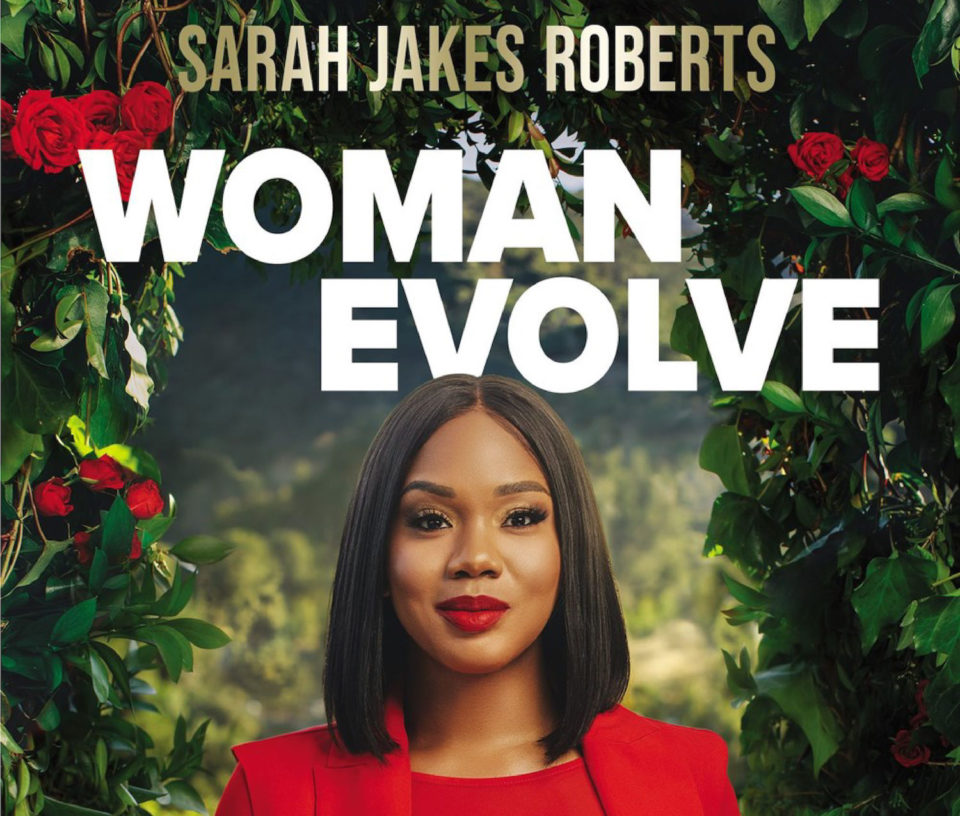 After building a global ministry, writing four best-selling books, and amassing millions of followers on social media, Pastor Sarah Jakes Roberts released her fifth book, Woman Evolve: Break Up with Your Fears and Revolutionize Your Life, on Tuesday. Inspired by the story of Eve, the book explores lessons from the controversial Biblical figure—a woman who Jakes Roberts says she can relate to more than she initially cared to admit.

The daughter of renowned faith leader Bishop T.D. Jakes, Jakes Roberts became a teen mom at age 14, and later went through a difficult, public divorce. At one point in her life, she also began waitressing at a strip club to earn money. However, she now uses the shame and pain of her past as a testimony to inspire others. Today, she co-pastors The Potter’s House at One LA and The Potter’s House Denver church with her husband Touré Roberts. She also has a podcast, fashion line, and runs the Woman Evolve national conference and movement.

“This book is that manual for women who may be feeling stuck or may be trapped in their past. This is the guide that we’re going to use to help move ourselves into who God has called us to be,” Jakes Roberts told BLACK ENTERPRISE.

Eve, the first woman created by God, is often held solely responsible for the fall of humanity. In the book of Genesis, she was living in the Garden of Eden with Adam without any hardship or sin. However, she was beguiled by the devil, who in the form of a snake, convinced her to defy God’s commandment and eat forbidden fruit. Eve also shared the fruit with Adam, and, as a result, they were condemned to a mortal life of hardship. Meanwhile, women were also punished with painful childbirth.

“Any woman who has ever had a cramp, who’s ever had childbirth, who has ever experienced anything of the pains of being a woman usually blames it on Eve. You don’t even have to be a Bible scholar to have dragged Eve for messing up in the Garden. And I was very much so like that until I had this moment where I was studying and I started seeing Eve differently,” says Jakes Roberts. At that moment, she began to see the humanity in Eve and envisioned her as a woman who was ultimately trying to recover from a mistake.

“There have been so many times where I knew better but didn’t do better. And I was tempted to stay stuck there. But much like Eve, I found the path forward. And so, I wanted to rescue Eve and any other woman who has found herself stuck and show her that you can evolve from whatever it is that you’ve gone through.”

In addition to sharing insights from the story of Eve, Woman Evolve illustrates how disappointments and past mistakes can be used to help women fulfill God’s calling for their lives. The book also encourages readers not to focus on past failures, and instead, focus on the pursuit of who you can become. Ultimately, Jakes Roberts wants readers to understand that your purpose in life does not change; it evolves.

“I want people to walk away with the reality that revolutionizing your life is possible,” says the mother of four. “My prayer is that people, when they read this book, will come to a place where they understand the revolution is closer than you think. Change is around the corner, but you have to be the person who takes ownership of your space in the world, and then allow God to direct you to his next for your life.”