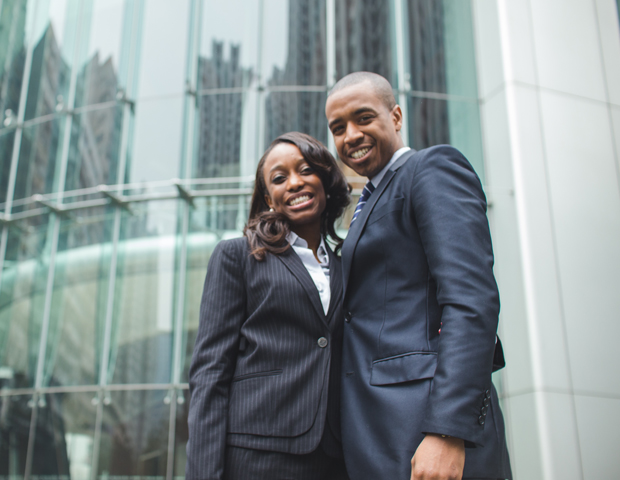 Power couple Elijah John BowdreÂ and Raushanah Bowdre, breathe life into the saying, “If something doesn’t exist, you must create it.â€ “In Hong Kong, black culture and its perception is often cobbled together from media reports, entertainment or second-hand accounts. These perceptions limit possibilities and opportunities for other black people who may want to come over and benefit from the economic gain happening in Asia. So we felt it was our responsibility to take ownership and create a platform to educate, celebrate and commemorate black culture and include our international and local neighbors here,â€ said Bowdre.

Elijah, founder of theÂ Global Citizens Community and Raushanah, a business consultant,Â relocated from New York to Hong Kong about five years ago. BlackEnterprise.com caught up with the couple to learn more about theirÂ mission to highlight and honor the extraordinary achievements and historic contributions of African-Americans and those across the “Black Diasporaâ€ including Africans, Afro-Caribbeans, and Afro-Latinos.

How did you both make the decision to relocate to Asia?

John: We both started out in Finance. While in undergraduate school, I got invited to attend a study abroad program at Shanghai University in China. I really liked living in China and completed the program. I returned to New York City to begin my career, but due to the financial crisis, I was laid off. So although we were still in a relationship, I decided to move back to China and start an entertainment company.

How supportive were you about Elijah’s desire to relocate to China to start a business?

Rashaunah: –When we were faced with his job loss, he asked me “What should I do? I really like China but what about us? I realized he was so excited about China and starting a business. So I took it upon myself to say, “Yes you should do it.â€ This was in 2010; we were still in a long distance relationship for a year and a half. We were only able to see each other only 3 times that year, but through Skype we made it work. A year later, I was able to transfer within my company, relocate to Hong Kong and then we got married. I really want to inspire other couples to support each other and pursue your dreams collectively.

Is there a large African American expat community in Hong Kong?

There are about 60,000 Americans living in Hong Kong. The black expat community, including the entire professional diaspora is small but powerful and encompasses blacks from other countries, such as Australia, UK, Canada, South of France and South Africa. Blacks are very segregated and dispersed amongst the 8 million people living in Hong Kong. So it’s hard for any consolidated representation of who we are. This is why we thought it was necessary to create International Black History Month.

When did you decide to launch Black History events in China?

We created the first Black History month event four years ago in Shanghai in conjunction with the US State Department. We brought on Tia Fuller, who at the time was a member of the all-female band touring with BeyoncÃ©. She also did tours and was the headliner for our Sunday Gospel Brunch. Last year we did the first Black History Month in Hong Kong, but it was an intimate event. But this year we hosted a series of events and it included the entire diaspora. Here’s a snapshot of our events:

In terms of marketing and promoting your events, did you face any opposition from the Asian community?

Initially people were a bit of apprehensive about the idea because of the stereotypes around Asia. It may not have to do with race necessarily but it’s just because we’re different and they don’t understand much about us. This actually propelled us to want to do more to bridge the gap. So we pushed forward and galvanized a team here to help with promotion.

We asked our local church to play certain gospel songs during service. And they were very receptive. Our church is multinational–half local Chinese, Australian, Â African, etc. Once we got the momentum going and an article was published about the event, we started to receive an overwhelming positive response.