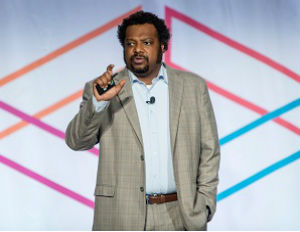 Internet Week NY–which “supports New York’s vibrant tech-based economy and celebrates the entrepreneurial spirit and global impact of technology on business, entertainment and cultureâ€–is wrapping up after delivering mountains of insight into innovative businesses and entrepreneurs.

BlackEnterprise.com attended a handful of panels. Here are some highlights and takeaways that came from the panels:

MondelÄ”z International SVP, Chief Media and eCommerce Officer Bonin Bough‘s keynote speech about #FearlessTalent focused on why companies should development talent from within. His push to unleash the “intrapreneurshipâ€ at a company, he says, is to encourage young talent to stick around and develop innovative ideas that could push businesses forward. And, according to Bough, nearly 10% of all graduates business schools leave the institutions and go to work for tech startups. Additionally, he said fewer than 1% of courses descriptions at the top 100 business schools included the words “emerging,â€ “mobile,â€ “digitalâ€ or “technologyâ€–terms quite popular in the field.

A fireside chat with fashion designer and Complex founder Marc Ecko addressed demographics. When Ecko became dissatisfied with the splintered advertising channels for his multifaceted audience, he was inspired to create Complex and adapted a model of “like-likeâ€ advertising/sponsorships rather than “look-alikeâ€ sponsorships from entities that thought the audience had a specific set of looks as well as interests. The approach of not grouping his audience into race, age and other categories in favor of interests has helped his company expand into the video business.

In a panel titled “Harnessing the Entrepreneurial Spirit,â€ speakers urged fledgling entrepreneurs to have diverse experiences in order to discover their next billion-dollar invention. Melissa Alam, the founder and editor-in-chief of Femme & Fortune, summed it up with her comment, “If someone else started it, could I do it better?â€ In addition to finding voids in the market, entrepreneurs looking for support in the forms of mentors and accelerators must be sure they have the right people on their side. “It’s key to have a mentor who wants to work with you,â€ Dorin Rosenshine, founder and CEO of Outleads, told the audience, adding, “Just like you want investors and advisors in your field, your accelerator should also have success in your field.â€

“Set up a pool of candidates to be diverse before interviewing,â€ was the advice from PubMatic President Kirk McDonald during the “Being Conscious of the Unconscious Biasâ€ panel. Other panelists agreed during the discussion about welcoming those “who may not see themselves in the tech industryâ€ to the field notoriously known to have few female and minority employees. They also agreed that not making diverse hires can hurt a company’s bottom line down the line, but the process needs to be one that’s willing to be accepted. “Just because hiring diverse staff is a proven good technique doesn’t mean businesses will do it,â€ said one panelist.

Cisco Vice President, IoE Global Practice Joseph M. Bradley talked about the growing Internet of Everything and his Top 5 implications of Digital Disruption (5. Data is everywhere, insights are scarce; 4. Real-time is too late; 3. If it doesn’t work on mobile, it doesn’t work; 2. Context is king; 1. Innovation is more than ideation), and also took issue with a phrase often found in the tech/startup world. “Fail fast,â€ he said, should be flipped on its head and replaced by the more positive “learn quickly.â€

We’ve talked at length at Black Enterprise about the importance of being present on social media and using it to build your brand. During a panel on that topic, Fashion Queens star Bevy Smith talked about another purpose social media served in her career: she used it to transition into TV. Having worked in advertising at VIBE and Rolling Stone, Smith spent two years live-tweeting episodes of The View (unpaid and unsolicited), building buzz and eventually scoring a guest spot on the show. She says that along with social media’s power to establish you as an expert in a topic that you love, you can also use it to build stronger relationships with fans and potential clients. Just make sure you set your own social media boundaries (times of day you’ll tweet up to promised engagement should a company come calling and want you to promote for them) and stay true to yourself.