Interview With Author of RIISE Roadmap to Independent School Success & Beyond 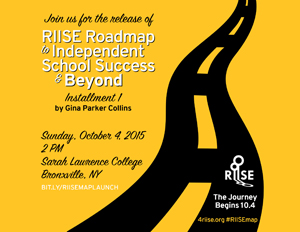 Wife, mom, writer, and businesswoman Gina Parker Collins bravely subjected herself to a unique experience at the RIISE Fall Boutique Recruitment event: being interviewed by her two children in front of a packed auditorium of about 150 people.

[Related: The Price We’ll Pay for Our Children’s Education: Are There Better Options?]

Her daughter, Elon, a ninth grader, and son, Chaz, a sixth grader, posed questions about the debut of Parker Collins’s eagerly awaited e-book, RIISE Roadmap to Independent School Success & Beyond, the first installment of which is available now as a free download. The second and third installments will be available in early 2016.

Parker Collins is founder and president of RIISE–Resources In Independent School Education–an organization that puts systems in place to attract, equip, and retain families of color in independent schools. The organization has 13 member schools, including two in Boston.

Parker Collins’s two children attend an independent school near New York City, but she attended public and Catholic schools as a child; her husband attended public schools. Neither wanted what they had experienced for their own children.

When she first heard about independent schools, she thought, Oh, those schools! They’re for white, affluent families–like the Kennedys!Â But as she investigated further and began going on school tours, she realized this was the option she had been searching for.

“At first, I was awestruck,” she says. “The physical space was bright, engaging. There was a palpable energy that said, ‘you’re not only going to learn, you’re going to experience–and we have the resources to help you,’â€ Parker Collins says. “Also, I noted what it didn’t say–it didn’t say, ‘kids are bored.’ ‘We’re preparing you for a test.’ ‘Gee, we wish we had engaged, visionary teachers.’ It didn’t say, ‘kids here aren’t safe.’â€

The book came about because Parker Collins was inspired by her family’s educational journey, but she also felt challenged by a school administrator. “He told me that he wished there were a bible that he could share with families of color. This was said to me after I’d been there a couple of years.â€

A Unique Education Journey
For some, the independent school option may have lost some of its luster with films like Prep School Negro and American Promise exposing the difficulties some students have experienced. Parker Collins says Prep School Negro provided “a framework in which to build upon the conversations in the book, and edified those conversations. We need to tell our own stories. What pops up in the Wall Street Journal and the New York Times is certainly part of the story, but it isn’t the whole story. We have challenges, but we have a lot of successes too.â€ The director of Prep School Negro wrote the foreword to the e-guide.

The book’s first installment tells how the unique educational journey of attending an independent school can benefit families of color.

“It can change family legacy,â€ Parker Collins says. “It can open doors, experiences, opportunities, and networks.â€ The educational lifestyle as Parker Collins calls it, is not just for the students. Parents must be involved.