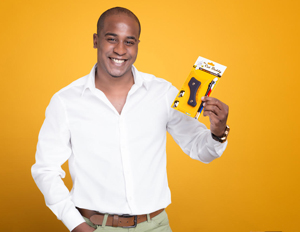 In 1988, Joshua Esnard–now the 30-year-old inventor and CEO of the breakout barber product of 2016 (The Cut Buddy)–was a 2-year-old boy. Esnard recalls the story of being in the countryside of his native Saint Lucia, as his father, Joseph, needed a way to get his Land Rover out of a ditch with nightfall fast approaching.Â Joseph Esnard was well practiced in improvisation coming from the small developing Caribbean nation. He can tell stories of building his own scooters and derby go-carts made from sticks, ball bearings, and used tires. Joseph could always find a solution where there was none. He searched a nearby field and found an old, rusting bow-shaped truck’s rear spring that he would wedge under the back tire to free his vehicle from the ditch.

Fast-forward to 1997 and Joshua, now 13 and living as an only child in the small upstate community of Ithaca, New York, graciously described by local residents as ’15 Square Miles Surrounded By Reality,’ needed a good edge-up and was too young to drive to the nearest black barbershop.Â After repeatedly mangling his hairline so many times that he had become resigned to wearing a do-rag under a fitted hat, Joshua needed to create a solution where there was none. In a room littered with Batmobiles made out of milk cartons and hand-sewn clothing designs, the inventor-by-nature began tracing designs out of cardboard from old pizza boxes and Tupperware containers.

Once the personal prototype was perfected, a haircut and beard template was born. From the age of 13 until the age of 28–when Father Time sardonically stole Joshua’s hairline away from him–Joshua saved thousands cutting his own hair and made money cutting his friends hair with the unnamed template, now known as The Cut Buddy.

The Cut Buddy product was officially launched in January 2016. Three months later, after a YouTube personality made a video showing audiences how to use the product, it went viral which lead to Joshua (and business partner Pima Mbwana) selling 4,000 units in a single hour and skyrocketing to the No. 1 ‘Best Seller’ spot on Amazon.com in the United States and Canada, forcing them to work 20-hour days to personally ship thousands of back-ordered units out of their garage.

By the end of 2016, The Cut Buddy had become the breakout barber product of the year with its own much-needed distribution and fulfillment center in the United States. With sales exceeding 50,000 units in the first full year of operation, The Cut Buddy is now going to be carried in select retail stores and other partnerships are on the horizon.

While the success is enjoyed, what makes Joshua and Pima most happy are the testimonials and reviews they receive from active military members, single mothers, barbers-in-training, and disabled users who have told them how important the product is to them.

Joshua had a problem and he created a solution where there was none.

Joshua Esnard will be speaking at the BLACK ENTERPRISE Entrepreneurs Summit taking place May 17-20, 2017, at the Marriott Marquis Houston.