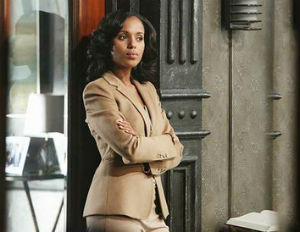 “Olivia Pope is no different than Joseline from “Love & Hip Hop Atlantaâ€ or Kim from “Real Housewives of Atlantaâ€ Ivory writes. — “She just has more expensive clothes, a higher paying job and tighter security. She is no breath of fresh air, nuanced or complicated, and definitely not a rarity in black female representation. She is merely presented on a shiny platter in a sparkly house instead of at the bar in a strip club.”

Ivory goes on to say that Olivia Pope, who is played by actress Kerry Washington (pictured) is not exactly a role model in that she’s “having an affair with a married man who made sure he secured a really good job for her that she has been able to turn into a profitable business. But not before she engaged in criminal activity to make sure he would get his job and formed a partnership with another woman he sleeps with. She sneaks over in the middle of the night for booty calls and has her “yesâ€ men and women to cover her tracks. She keeps a thug around (Huck) for protection and to do her dirty work. She keeps a good guy on the side who she should “really be withâ€ in order for her to claim to herself and others that she is finished being a whore.”