Is Your Glass Half Full or Half Empty? 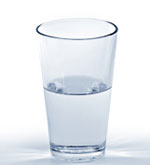 Many of us continue to be battered by hard times. Economists claim that the Great Recession is a memory. Well, tell that to the hundreds of individuals forced to pound the pavement trying to find a job–any job–or to the once middle-class families who now represent the “new poorâ€ in today’s society.

My question to them and to those facing similar circumstances: Do you see the glass as being half full or half empty?

I’m not being flippant. On the contrary, I’m telling you it’s time for us to stop whining, count our blessings, and forge ahead. If you’re among the employed or you own a business, your focus should remain on what it is during flush times: Strive to be the best at whatever you do as you relentlessly pursue the next career-building or revenue-producing opportunity. I have always maintained that the true measure of a professional is not his or her performance in good times, but his or her response to seemingly daunting challenges. You see, the difference between an outstanding achiever and a mediocre performer is razor thin. So, what distinguishes one from the other? Attitude.

I, for one, am an unabashed optimist. To use that old but still relevant adage, I always see the glass half full. Don’t mistake me for a Pollyanna wearing rose-colored glasses, though. To realize my measure of success, I take responsibility for my actions, map out a strategy for personal and professional achievement and, above all, retain an unshakable belief in my abilities. And I’m not alone; it has been proven that optimism is embedded in the DNA of successful people from all walks of life. For example, a Metropolitan Life Insurance study on positive outlook and success ratios revealed that sales personnel with the highest levels of optimism sold 37% more insurance policies than those identified as pessimists. And according to an article in Corporate Wellness Magazine, optimism is the No. 1 personality trait in predicting professional success. Moreover, experts have reported that optimistic workers have more drive: Optimists who have been laid off take three to six weeks to begin a new job search; pessimists take as long as six months.

So in these uncertain times, it’s critical to maintain a positive outlook. Most will be unable to land new positions or find much-needed capital to grow their businesses if their vision is clouded by pessimism. Too often I find entrepreneurs, business associates, and employees making excuses, looking to blame others or throw their colleagues under the bus instead of taking responsibility and correcting course when they’ve made mistakes or crashed into obstacles. That’s why I surround myself with positive friends, employees, colleagues, and partners who are honest and unstoppable. That can-do spirit becomes contagious and self-reinforcing. Optimism is the fuel of energy. In fact, challenges large or small help to recharge my batteries.

I also agree with the philosophy espoused by Janice Bryant Howroyd, a dynamic BE 100s CEO. She asserts that there is never a bad time to conduct business–especially for African Americans. Since opening her staffing firm more than 30 years ago, Howroyd, like countless black business owners, has had to contend with lack of capital, insufficient resources, and closed doors. Despite those barriers, she has steadfastly maintained a laser-like focus on the next business opportunity. As a result, she owns the nation’s fourth largest black-owned business, which operates around the globe. Last year it grossed nearly $1 billion in revenues.

African Americans, more so than any other group of professionals and entrepreneurs in this country, should confidently emulate Howroyd’s can-do attitude. Time and again, we have proved our resilience regardless of whether the economy was up, down, or sideways. In fact, I have found that during times of crisis we often display our greatest levels of perseverance and ingenuity. That’s why we should all view the glass as half full. And if you find one that happens to be empty, be assured that you have all the resources you need to fill it to the top.