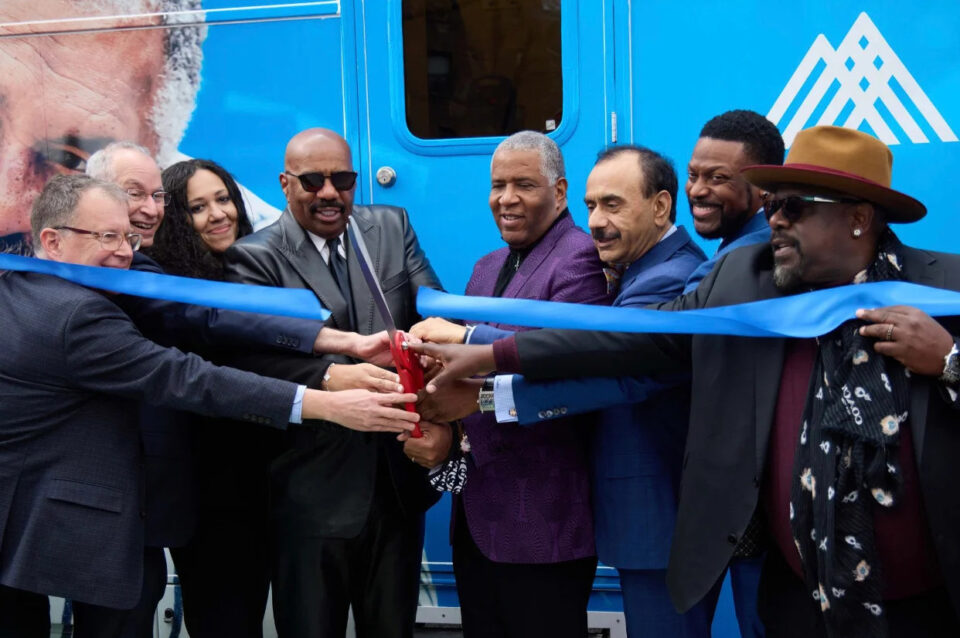 According to a press release, the purposeful event, which signifies a commitment to enabling early detection of prostate cancer for at-risk Black men, reunited some of Smith’s high-profile Black male celebrity friends and local medical experts to mark the occasion.

The launch of the screening bus was made possible through a $3.8 million donation Smith made in February 2021 to Mount Sinai’s Milton and Caroll Petrie Department of Urology.

“As a community we have faced and still do face a fair number of disparities in resources, access and information,” Smith said in his speech at the launch on Friday, according to Essence. “It’s important that we — which is why I brought all these beautiful Black men here to support what we do — educate each other and we bring resources to bear to help our community; not just to survive but to thrive.”

While the momentous occasion served a significant cause, it also brought to light the love that the Black men at the event shared for one another. Harvey uploaded a video on Instagram describing his excitement for his reunion with comedian Cedric the Entertainer.

The video shows The Neighborhood actor entering the scene while the others were posing for photographs. When Harvey caught a glimpse of him after hearing his voice, he immediately embraced his long-time friend and Johnson’s Family Vacation co-star with a big brotherly hug.

“Very important Prostate cancer mobile launch….. then I saw my Dawg!!!!! All love been too long @cedtheentertainer,” The Family Feud host wrote in the clip’s caption.

In response to the adorable video, Cedric wrote in the comment section, “My Dawg!!! Partna! Brother, Dert, lets get it!!”

Fans gushed at the sight of the video clip, also declaring how important it is to show Black brotherly love more often.

“PRICELESS. Now this should be the one viral! brotherly love!!”

“Prostate cancer awareness is so important and early detection is key, but the love between Mr. Harvey and Ced warmed my heart.”

“Man they genuinely love each other. I love them.”