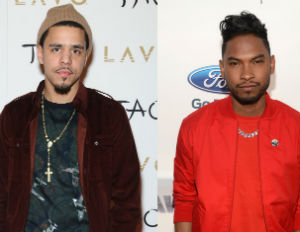 Would you believe me if I said … that it took me a while to come around on J. Cole’s first single from his forthcoming album? I’m not quite sure why. If not for the embarrassment I felt when a friend very badly sang Miguel’s desperate and syrupy, “baby, I want you to waaaaant meeee” in tandem with some ladies at a lounge, I would have had no idea the song was so popular. Late for that.

Alas, I’m converted, and you should be, too.

For J. Cole and notably of late, frequent Cole collaborator Kendrick Lamar, songs about relationships can be a double entendre for the relationship with hip-hop game, business and personal relationships, the struggle for identity, the ups, the downs. Common is the godfather of the device.

This is how we break it down:

When paying $1,700 for the rent is money well-spent

J. Cole’s always talked a lot about the sacrifices he made to stay in New York City. And if you know anything about sky-high prices of rent in New York City, you know it’s not a game; for what many of us pay for small spaces, we could live like relative kings and queens in Atlanta or Charlotte or Columbus, but that’s not something I want to talk about now, or ever. Cole said that he had no heater in his pad, but he made songs, “heatâ€ that would endear him to his protege, Jay-Z. He eventually signed a deal with Roc Nation. The rest is history.

The lesson lies in Cole’s sacrifice and drive, and also in his unmistakable humility. Before Sideline Story dropped, he constantly told the story about how he went back to his landlord who allowed him to stay in the apartment before he got the money for his deal. It’s a narrative that shows Cole’s drive, but also a keen understanding for how money and sacrifice are intertwined.

The top line, ‘Got me up all night,’ is the song’s coolest, most dissectible cue to double meaning. One of the worst things in the world is to have sleepless nights over issues going on in your relationship. Not that I know or anything.

But to have a sleepless night over preparation for your dream, obsession or side-hustle — in Cole’s case, the music — is beautiful. There is no substitute for work. Life rewards action. Just, please, refrain from all versions of the “They Sleep We Grindâ€ euphemism. Just do the work.

References to “vamping,” as the kids say, are totally acceptable.

I’ll be honest, I forgot about this reference and that it was actually a thing. But it’s the funniest part of the entire song. You’ll remember the hook from Ron Browz, “Gimme 20 Dollars,” which says wifing in the club is an act punishable by a fine of $20. Cole doesn’t care, though. He loves his girl too much to care about the embarrassment — or the twenty dollar bill.

I just listened to the song, and it’s well … still terrible. It was definitely once a thing, however.

With references to giving this girl with whom he was once in a relationship, Cole alludes to giving her a ring and/or a child. Both are quite expensive and the lesson is that when you’re not thinking rationally, financial consequences can be disastrous. Imagine if he or someone who can’t afford it, takes out a pricey, interest-heavy loan to buy an engagement ring? Or worse, have a child with someone who’s not ready for the quarter-million dollar investment it is to raise a child nowadays?

Cole seems fine with the decision he made, but it shows his sensitivity to the notion that he was, as he once said, “close to the cliff like Mrs. Huxtable.”

The song is a lesson in the principles of partnership

No one will soon forget the collaboration between Miguel and J. Cole on “All I Want is You,” the title track from his first album. “Cold world, never thought I’d see the day you’d be my old girl,â€ Cole rapped over the bluesy loop. It was one of the most popular songs of that album, but both artists were still on the cusp of mainstream popularity and were building their fanbases.

Fast-forward to today: Not only was Miguel’s “Kaleidoscope Dream” one of the best albums of the year, ‘Adorn,’ won the Grammy for Best R&B Song. He also performed at the Grammys.

J. Cole’s “Sideline Story” sold well over 200,000 copies its first week. Far more successful than they were three or four years ago, their collaboration is a testament to business partners and entrepreneurs to stick together, accentuate the skills each party brings to the table and, ultimately, build on that success.

On that note, we’re all the way in on a Best of Both Worlds-type collaboration from these two.