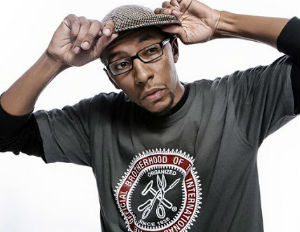 In 2003, Jabari Graham was at a crossroads. He was 23 years old, and just got laid off from his job at the Universoul Circus. Like most people in America, the first place Graham went to was the unemployment office to get a check, and hopefully a job, eventually. While a job never came around, he did end up walking out with something better: An idea.

“I remember being at the unemployment office, [and] they had a VHS tape of Les Brown playing,” says Graham. “He said, ‘during this time of unemployment, if you can’t find a job, maybe you should create a job.’ That sounded good to me, so I did it.”

Inspired by his love of art and music, Graham set out to create an art showcase called Art, Beats & Lyrics. The exhibit combines urban contemporary art with hip-hop, giving visual artists from the hip-hop generation a forum for their art to be displayed and viewed by their peers as DJs and selected singers and rappers provide the soundtrack. Think uptown art gallery meets downtown night lounge.

AB+L also serves a community of young, urban art lovers that most festivals and galleries, fail to recognize.

“I was helping my cousin run a booth at the National Black Arts Festival [in Atlanta] and I noticed his art wasn’t clicking with the older audience the festival attracts,” he says. “I thought that was an opening right there. I wanted to know if there were art shows that reached out to the younger audience. There weren’t any.” He continues, “I did my homework and went to other shows that tried to, and I wasn’t impressed. I knew I could produce something better with my background from the circus. Getting laid off was motivation and working on this got kept my wheels going.”

Starting out with an initial investment of $1,500 made up from borrowing from family and church, donations from local business and those always helpful unemployment checks, Graham hosted the first AB+L in 2004 at quaint Atlanta venue The 5 Spot. It drew about 300 people and from charging $5 a head, Graham broke even with just enough to cover his living expenses for the next month. While he didn’t get rich from the show, he caught the attention of the HIGH Museum who invited Graham to host his next AB+L inside their corridor, as well as Sprite who jumped on as a sponsor to help with production costs.

“They gave me $10,000 to promote and build it,” he remembers. “I probably could have got more, but I was so impressed at that number at the time. But even after that show, I was back in the same boat, I had just enough to pay my rent and bills that month. That’s when I got introduced to the idea of corporate sponsorship.”

In 2005, word of Graham’s show began to spread, and even led to his old employers at Universoul re-hiring him to help with promotions. Around the same time Atlanta-based ad agency Images USA, who was working with Jack Daniels Whiskey at the time, got in contact with Graham and asked if he’d be interested in partnering up with the iconic liquor brand.

With backing from Jack, AB+L took its show on the road and hit four markets, Atlanta, Charlotte, St. Louis and Jackson, Mississippi. In each year since, Jack Daniels has thrown even more financial support behind the show, and it has grown to visit more and bigger markets, with this year’s run including Los Angeles, Houston, New York (show was cancelled due to Hurricane Sandy), Washington, D.C. and Miami during Art Basel weekend.

Initially, Jack Daniels put up around $100k for those first four markets. As of 2012, Jack is investing as much as $500k on research and planning and over $1 million on production and promotion, says Graham. The support has also allowed for the show to be free to the public, only requesting an RVSP through the AB+L website.

While the Jack Daniel’s brand, Gentleman Jack specifically is heavily featured on all signage and mentions of AB+L, Graham insists that the show is still one that puts the art and people first, not a corporation.

“AB+L is an organic event,” says the Jackson State University graduate. “I learned from the circus how to make a show friendly. I wanted to make it diverse, cool and not driven by a superstar name. The money doesn’t change it, it just enhances it.”