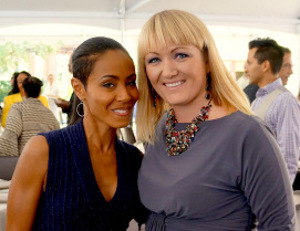 The safety app, bSafe, available on both iOS and Android phones, is already in use by over 200,000 Norwegian women.

Now, thanks to an investment by actress and humanitarian Jada Pinkett Smith, the app will soon be used internationally to fight human trafficking.

Bipper was founded by Silje Vallestad in 2007. A mother of three, she was concerned after her six-year-old daughter’s friends began using phones, and wanted a way to track her children’s safety. Bipper developed and launched MobileKids inÂ Norway and won many awards for their innovative new service.

Jada who had recently appeared at the UN advocating for the rights of human trafficking victims, discovered the app after her daughter Willow began using it. She immediately recognized its application as a personal safety device that can be used by anyone.

After Vallestad moved to the United States, she was contacted by the Smith family. Vallestad says the phone call came unexpectedly.

“To be called up by one of theÂ most famous families in the worldÂ telling you that they are using one of your products and want to work with you, is unreal, absolutely amazing!”

A few weeks later, Vallestad found herself in the Smith family residence at a lunch event with First Lady Michelle Obama. Soon after, Jada Pinkett Smith invested in Bipper and the two have begun planning the launch of Bipper’s safety products, bSafe and MobileKids in the U.S. Market.

Pinkett SmithÂ adds, “Bipper is my first technology investment, and I chose it because I saw the potential to solve real problems for kids, parents, and anyone looking to increase their overall safety. bSafe is a wonderful app that everyone should have.â€

“We are joined by amazing people,” Vallestad says.Â “People with a real passion for both our products and the potential of the company. That they found us because they were looking for a product likeÂ bSafe, and that they are superusers themselves makes this even more exciting. It’s a dream situation for an entrepreneur,”Â says Vallestad.